Well, we finally got that copperhead that's been terrorizing and killing our chickens. A copperhead that was around three and a half feet long was found curled up in the shop near some equipment so we cornered it with a flat shovel, schwacked the fucker with the head of the shovel and crushed its head just to be sure. The son of a bitch killed two of my birds in the last three weeks and I believe sither this snake, or one of his siblings to be responsible for the killing of one of the turkeys as well.

We have a lot of cottonmouths, copperheads and pygmy rattlers at the west side of the property because there is a water source [drainage ditch] and thus ditch rats, moles, voles and other small critters to eat. This is the fifth poisonous snake we've killed this year. We leave the non-poisonous ones alone for obvious reasons. In fact, as long as they mind their P's and Q's, we leave the poisonous ones alone as well, but when they start killing our birds and eating eggs, that all changes. We had one particularly greedy racoon that made it in to the henhouse, tore up the nests and ate several eggs. We strengthened the wire but he got in again. It was pretty aggravating but we sat out one evening for five hours waiting on the 'coon to come back, and when he did, we shot him with a 30-30. I didn't want to kill it, but there is only so much chaos the birds will take before they start to lose feathers and quit laying eggs.

Oh well, at least the Sherriff didn't come around asking who's out here shooting the place up at ten o'clock at night like they did the last time. We're only about four hundred yards away from the State Troopers central county headquarters so if we shoot anything, we can usually count on getting paid a visit. Normally, I am the one doing the shooting, and most of these guys either shoot at our range or know me from other venues, so it is just a sort of mandatory "must respond" sort of thing. I've only ever been scolded once, adn that was for using a shotgun in lieu of a rifle.

LOL re ridding yourself of pests...

I went out back just a few minutes ago and the birds seem to be much more calm. I think this bastard was domiciled right near or even under the hen-house, to the area was pretty target rich. I just hope I got the female. If we have a nice deep cold snap, like 25 or 26 degrees for over eight hours, we usually have a pretty big kill-off of copperhead and cottonmouths in our area. They will try to get in the sun, but they are moving so slow the ospreys and hawks kill and eat them.

Rattlesnakes no so much. Those guys know where the good deep burrows are and hide out underground until it warms up again.
J

this your ditch, Ancona? How many can you count? 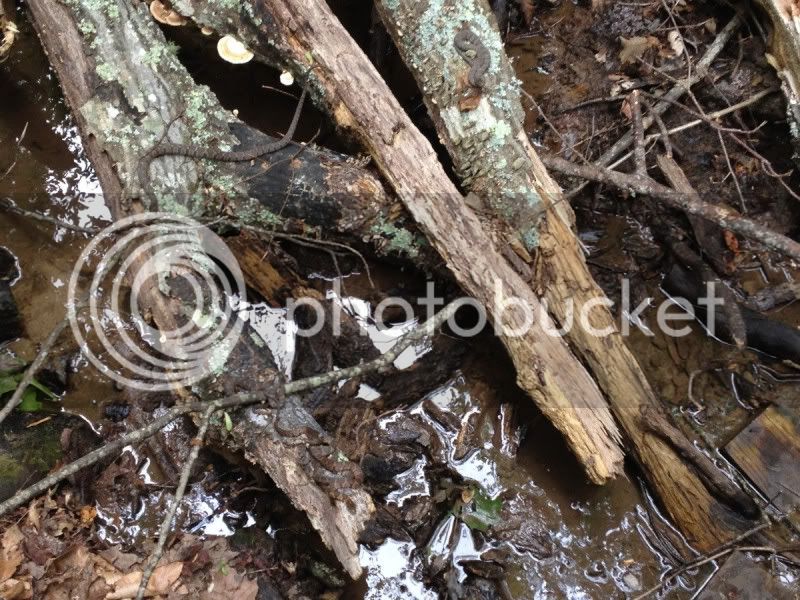 We have lots of copperheads and rattlers, was standing about eighteen inches from a two foot rattler in flip-flops last month. He never buzzed or anything; it was pretty cool though. Slung him off in the woods.

I wouldn't have been so casual had he bitten me I'll bet. Heard the juveniles are worse because they can't control the amount of venom they inject.
O

Wow. You guys can have all your 'nice' weather. I'll take cold winters and no snakes any day.

I have never seen a snake in PA. I did in IL.

ancona said:
...
We have a lot of cottonmouths, copperheads ...
Click to expand...

We have lots of those in my neck of the woods too. I used to enjoy snake spotting while walking through the woods when I was a kid.

Just love those late and early freezes we often get - they mean a year or so with very reduced pests, particularly insects. I've seen and killed just one copperhead since 1980 here. Plenty of black snakes, but they're harmless/friends - they really keep the small rodents down.

Snakes are more fun to shoot (good practice at hitting small targets), but a hoe works better...quicker. I'm lucky - no one bats an eye if I'm out shooting at night, but that's fairly rare anyway.
J

my filipina wife will chop a worm snake into 1,000,000 pieces with a machete while screaming bloody murder. No matter that I have explained to her time again that most snakes are good in that they eat pests (roaches, rodents, etc,). Took me awhile to figure out that every snake that is harmless here is deadly in the Philippines. (Little green snakes, little brown snakes, etc.)

Here is how my wife handles snakes: I wanted to see a cobra, so i told the kids to get me if they found one. One day they came and woke me up (I was taking a nap). All the kids are outside screaming "ahas ahas (snake) and throwing rocks at a hole in the ground. I got a rag and put some kerosene on it and plugged the hole, after a few minutes I unplugged it and the snake came out. At which point the kids started screaming again and throwing rocks, so the snake went back into the hole. Bing came out to see what the noise was all about, the kids told her there was a snake. She poured the kerosene down the hole and lit it. There.

We have black mambas, cobras and puff adders around these parts (Athi Plain near Thika, Kenya).

My first year here I would go for long walks at night to get exercise. Then I started reading about the snakes. Puff Adders are like an American rattlesnake but they stick their head up and hiss instead of rattle.

They cause the most deaths of any snake because people walking barefoot at night step on them.

I don't walk so much at night any more.

At my farm last year, I was building a fire in the hot water heater, and pulled a piece of wood off the wood pile and it had a small cobra curled around it.

I tossed the whole thing in the fire right quick.

Out here a lot of the animals are the same as back home. Instead of skunks we have honey badgers - which are just skunks that specialize in stealing honey from the bee hives.

My great grandfather always kept bees. I don't know why, but I waited until I moved to Africa to try it myself. It's easy here, because there are so many honey bees, four species just in Kenya. You put up a bee hive in September, and within a few weeks a swarm will just move right in, since that's swarming season here.

Bee farming is something that has always fascinated me. Wouldn't work too well in the suburbs around here though.
M

You guys can keep your snakes. The only snakes we have here are Garter Snakes which are non-poisonous to humans. Considering our weather, I am surprised that we don't have more varieties of snakes.
D

My friend here lives in the suburbs and has 10 young kids running around the yard. He slung one of his bee hives about 8 feet off the ground under a tree. No problems at all.