Historical analysis of secular bull markets suggests that we are close to the bubble phase, the final move of the cycle.
Compared to the 1970s gold bull market and the Nasdaq bull market, we should have about 2 more years, including the insanity phase.

Article and charts by aden forecast:

Lows In The Making

The markets have become demanding (or should we say, desperate). In spite of the stimulus by four central banks, and the Eurozone bailing out their banks, the markets want more.

More interesting, the gold price has held above its December lows. It’s holding firm, in spite of it all and especially considering the Summer months are seasonally slow months for gold.

It’s also not breaking down while the dollar strengthens. This in itself is a bullish sign. It seems to be telling us that more stimulus is coming.

The June months tend to historically see the most lows for gold. The next popular low month is August. So again, we’ll be watching the $1536 lows carefully during these lazy days of Summer.

On the upside, if gold breaks above $1650 and stays there, the worst will be behind us. Then $1700, $1800 and $1900 will be the next stepping stones in the renewed rise. Record high territory would confirm the making of a strong leg upward.

How high is anyone’s guess. It all depends on the explosive stage in the bull market. That phase is still to come and Chart 1 provides a good example of this. 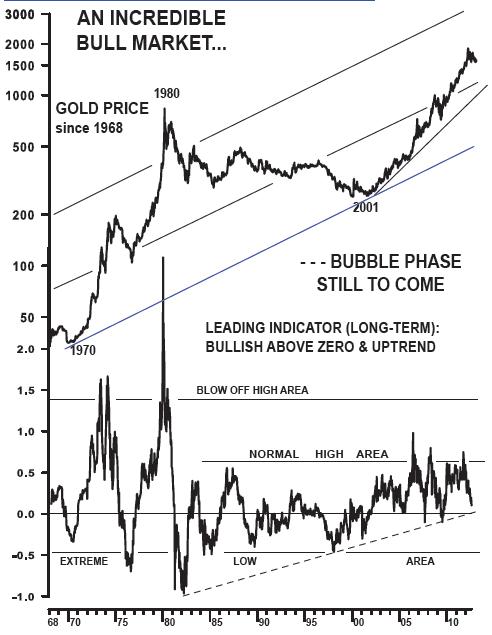 As you can see, gold has been moving within a mega upchannel since 1970. The gold rise since 2001 still has a ways to go before reaching the top side of this mega uptrend.

Note on the top chart that gold moved into the upper side of the mega channel when it burst into record territory in September 2009. This was just six months after QE first started in March 2009.

When gold reached the $1900 record level last September, the leading indicator (below) rose to the normal high area and it’s been declining since then, now approaching the uptrend and zero line.

This is the meat of the matter… the bottom line. The indicator is telling us that even though gold has risen in a clear consistent bull market for 11 years now, it has yet to reach bubble explosive levels.

Chart 2 shows this comparison well. You can see that today’s bull market hasn’t yet begun to move in bubble explosive conditions.

It’s getting closer though and the timing suggests we could see the start of the bubble phase by next year.

There really is no fever like gold fever, and the fever hasn’t started yet. For example, for this bull market to gain 2300%, we’d see a $6000 gold price, which would blow the gold price well above the mega upchannel.

Today, however, the mood is down. Many are discouraged by the decline of the last almost 11 months. It’s really not because of the 19+% decline, it’s the length of time that’s taken the enthusiasm out of the bull market.

But don’t be discouraged. If this sluggishness lasts another month or even two, it’s fine and new positions should be bought on weakness.

Buy on weakness and hold... a good strategy.

--
Mary Anne & Pamela Aden are well known analysts and editors of The Aden Forecast, a market newsletter named 2010 Letter of the Year by MarketWatch, which provides specific forecasts and recommendations on gold, stocks, interest rates and the other major markets
Click to expand...

The text is a bit confusing as gold was just breaking through the $1000 mark in sept 09 then an immediate reference to last septembers record price of $1900.
We know what they meant though (-:

A threefold increase from here, over the next 2 years, will have me cashing out (target just under $5k /oz) and converting to real estate, if the place of dreams is still for sale.
S

rblong2us said:
A threefold increase from here, over the next 2 years, will have me cashing out (target just under $5k /oz) and converting to real estate, if the place of dreams is still for sale.
Click to expand...

I have a similar plan :cheers:
M

rblong2us said:
... if the place of dreams is still for sale.
Click to expand...

EVERYTHING is ALWAYS for sale. It is just a question of price.
D

I remember reading the adens when i 1st got into the business. They weren't very good about timing declines but sure did like to hype up the advances!

I still like reading their analysis from time to time. Not worth money though.
S

Volatility during the current bull market has been nowhere near the 1970s extremes so far: