The dollar index (DXY) is a synthetic index. It is calculated as a weighted geometric mean of the dollar's value compared only with "basket" of 6 other major fiat currencies which are:

The makeup of the "basket" has been altered only once, when several European currencies were subsumed by the Euro at the start of 1999.
http://en.wikipedia.org/wiki/U.S._Dollar_Index

That is the problem: It was constructed 40 years ago and doesn't reflect the current economic landscape at all. Moves in the Euro are dominating the index. There only one Asian currency in there, JPY. Major currencies like CNY, BRL or RUB aren't included.
The DXY is still seen as the measure of the dollars value in global trade, however. It's also having a significant on precious metal performances in USD.
Just looking at the composition, you can see that three largest parts are currencies that are in trouble: EUR, JPY, GBP. Euroland is permanent crisis since 2008, that has weighed on EUR/USD. The Japanese are currently going kamikaze. GB has been printing like mad for years. What this means is that the DXY is essentially comparing trash (USD) to garbage (EUR, JPY, GBP).
I think that we'll see a clearer decoupling of pm performance from DXY moves in the future for that reason.

Yeah, CHF is also pegged to EUR now, so it's inclusion in the DXY formula is somewhat redundant, isn't it?

Merge the two threads :flushed:
I couldn't search for "dxy" because it's a three letter acronym...

No problem sa. BTW, you can use Google to search for 3 letter acronyms.

DXY fell below 80 today. We last saw this territory back in February.

I don't think I used the "dxy" in my comment. I believe I simply said that the dollar index is only compared to this basket, and with cooperative (well, mostly) devaluation going on worldwide, had/has little to do with actual strength of the dollar in real life. SA and I agree, I believe.

Are we Beginning to see a loss of Confidence in the US Dollar?
Based on the price action, the answer to that question is it is certainly looking like that. The Dollar is within a hair's breadth of a strong region of support. If it does not hold, we will know the answer to this question is "YES".

I have also noticed that in conjunction with this move lower in the Dollar, interest rates at the long end of the yield curve are also beginning to drop once again. That is not good for the Dollar.

The catalyst for this was today's stunningly poor payrolls number for the month of September. Forecasts were for 180,000 jobs being created. Instead we got a pathetic 148,000! With that, it was a big "KERPLUNK" for the US Dollar and that sent gold careening higher as once again any notion of a slowdown or "taper" in the Fed bond buying program was immediately shelved.

All I can add to this is to say "Watch Out" if the US Dollar Index cracks chart support. ...
Click to expand...

He included a few charts, one of which indicates the critical support region is around 79. Looking just now, I see the DXY at 79.17. 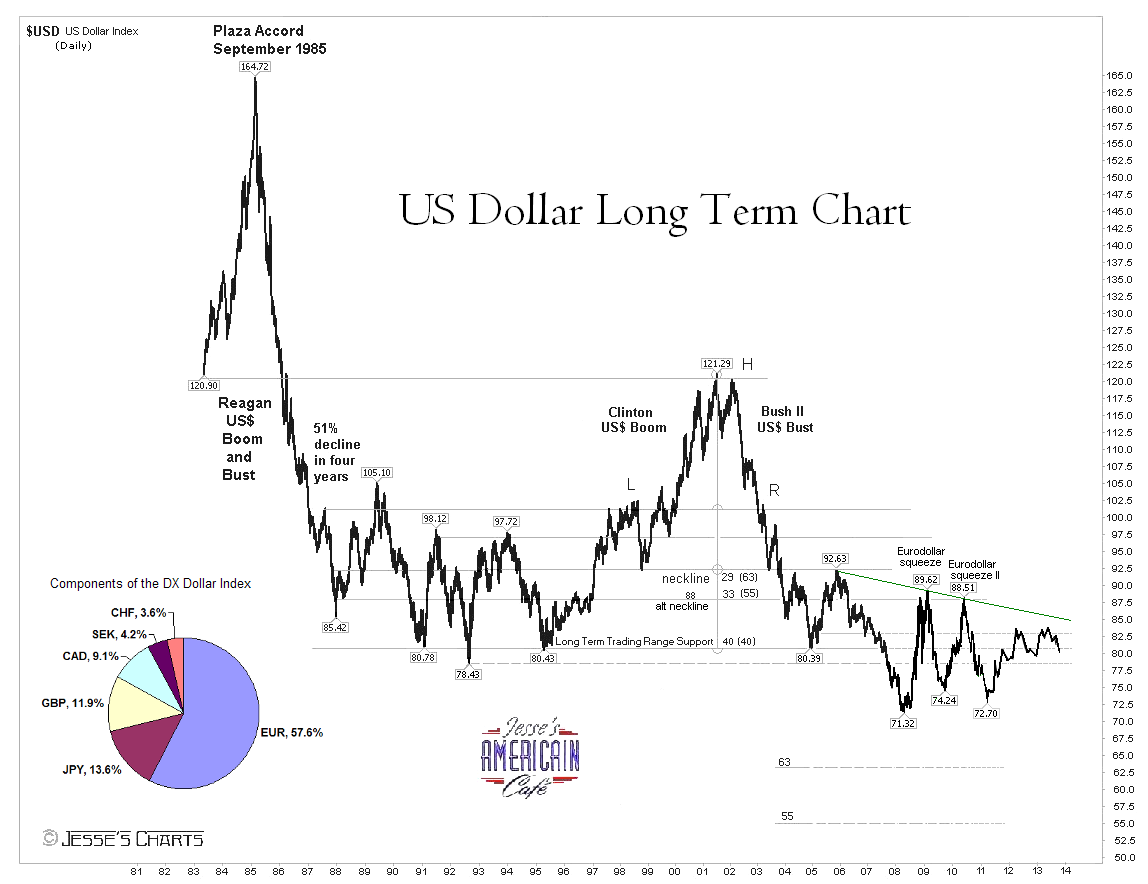