Hey, I am not a chart technician (perhaps the opposite, as the below chart is so bearish looking), but the question arises WHEN is a good time to buy the gold miners? This is (was supposed to be) a three year chart of the HUI (symbol $HUI at stockcharts.com): 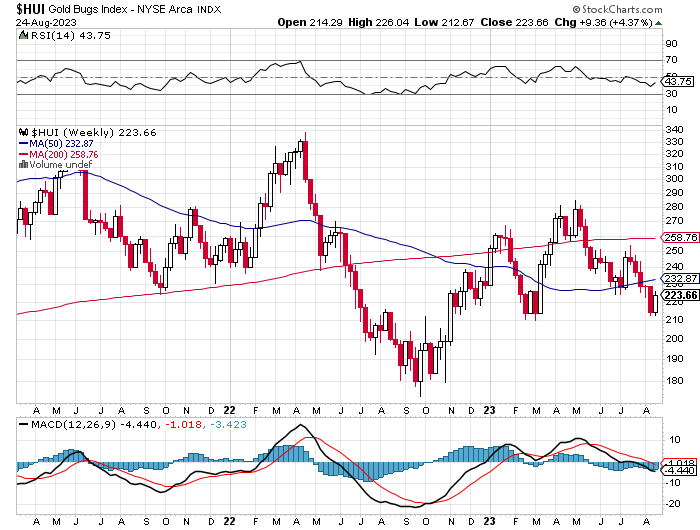 (Bah! I was hoping the image would come through.)

Three thoughts come to me though:

2) FOFOA says to buy the gold, not the miners (risk of expropriation or heavy taxation).

3) I have never bought gold miners before, and I read that many gold mine operators are incompetent. <-- I would be interested in any views on this.
Last edited: Oct 30, 2014

just for you Bearing -

So what kind of investments are gold mining stocks?

That is a good question too.

On the surface, they look like value. Compared to other stocks, they’re cheap. The US stock market has more than doubled since ’09, the gold miners have stoutly held its ground.

They are still as smashed and dented up as they were when the crisis began. That is not to say that they won’t be even more wrecked next year. But right now there are probably a few cans of beer intact, lying among the wreckage, ready to be picked up.

What caught our interest was a couple of articles written by colleagues Steve Sjuggerud and Chris Mayer. Simultaneously and independently both have concluded that the time to get back into gold miners is now.

That is especially significant because Steve and Chris are among the best stock pickers in the business. They have each approximately doubled the performance of the S&P over the last 10 years, a feat that the Efficient Market Hypothesis tells us is practically impossible.

It would take a brave stockbroker to recommend mining companies now. Not only are prices low, there is no reason to think they might rise. The world economy is slowing down, not speeding up. Commodity prices are falling, not rising. Inflation is ebbing, not flowing. And the dollar, against which gold and other commodities is measured, is going up.

Which makes us wonder if the time has come to buy.

“After a horrendous couple of months, gold stocks appear to be trying to bottom out. We have a glimmer of an uptrend setting up. The sun might be starting to rise.”


Is the sun already peeping over the horizon? We don’t get up early enough to know. But as long as the earth still turns, the sun must rise sooner or later. And we are tempted to take a position in these deep discount gold mining stocks and wait – just as though they were value plays.

Steve prefers to put in a stop-loss. He figures the most he can lose is 7%, while the upside is huge:

“The last time gold-mining stocks were this hated was in late 2008. The Sprott Zacks Gold Miners Index soared 242% from its bottom in late 2008 until the end of 2010 – just a little more than two years.”


Steve is hoping for a re-run.

Buy now? Use a stop loss? Wait for a clear up-trend? We don’t know which approach is best… but we’re planning to study the issue and report back.

I do not need a chart to tell me that the miners are seriously pissed off over the shenanigans in the paper market. They ahve pushed gold and silver to the point of being unprofitable to mine. There are rumbles of banding together to hold production off-market until the bullshit subsides and silver/gold reach acceptable levels. A little bit like OPEC if you will.

Hey, if the miners DO decide to hold some production off the market, I wish them well. It seems like it would be very hard to do, that is, have any real effects on the (paper) gold & silver prices.

I just bought a little Au today. Yes, I BTFD! BTFD has not worked out real well over the past two - three years, but I am trying to take a longer view (as almost all of us here at pmbug.com do).

Japan is an example of how long seemingly impossible things can go on and on and on... We all know (or are pretty sure, LOL) that the end will not likely be any fun in Japan. What we see there may be but a precursor, a vision, of what will happen here in the West. And timing is so difficult, I realize that more every month that goes by...

My point here? Diversification! Hold some CA$H, and yes, some stocks and (maybe) bonds, although I would not BUY bonds here. (Although I would have made LOTS & LOTS of money had I bought 30-Year Treasuries when they were yielding 4% and more...)
You must log in or register to reply here.
Share:
Facebook Twitter Reddit Pinterest Tumblr WhatsApp Email Link
Top