Related to threads such as this one:
http://www.pmbug.com/forum/f9/gmo-food-labeling-2378/

And my own interest in healthly, cheaper produce prompt me to start a thread of various sources on gardening. Feel free to post any informative links you find or personal knowledge.

Let me get the ball rolling with a good article on potatoes:
http://www.survivalblog.com/2013/05/our-guerrilla-gardening-by-oregon-pat.html

"...more than 30% more potatoes (by weight) was produced by plants that had dirt mounded around them."

"The straw around the potatoes had no significant effect on increasing the amount of potatoes, but actually had a large NEGATIVE effect in that the potatoes grown in the straw had much more mold and losses to mice."

"The plants with a bucket around them had lower yields than their peers. No rodent damage but I suspect the buckets decreased the sunlight available to the plants... With all the ideas on the internet about stacking tires or boxes around the plant as it grows, I figured there would be something too it, but it didn’t pan out for us."

"In the new, “unworked” garden area, we saw similar results, though yields were smaller than in the tended and fertilized area. Average Purple and Gold yields were 1.5 to 2.75 lbs per plant, and the Reds averaged 3.5 lbs each. This is about 40-60% less than the same averages from the “normal” garden"

"The plants in the areas where grass and weeds were thick (and left intentionally) still grew and produced potatoes, but were ~25% lower yields than the other plants in this area"

Swiss chard is supposed to be a Fall season vegetable here on the Texas coast, but I've had really good luck growing it from Spring until Winter. It needs some TLC (ie. water) during the sweltering 100F+ summer days, but it keeps growing and producing.
J

I appreciate the potato article. Forwarded the information to my friend in the country. He rented a bobcat and excavated down eighteen inches, and then we brought in soil, cause they can't have a garden cause its all rock, and we needed a fallback garden since we live in town. Win/Win as far as I can see. We were both going to try the potatos in straw thing this year. Currently I have red skinned, white flesh sweet potatoes in the ground. That has been the most productive, so far. About ten pounds of fat white tubers per plant. About half that of the white skinned, white flesh sweet potatoes.

yeah, good read. I was thinking about "potato towers" myself, because they were supposedly oh-so-productive, and YT is full of people constructing them - only, I did have troubles finding any follow ups with harvest results, that would indicate that promised extraordinary growth.
One of many urban myths, I suppose.

The easiest potatoes to grow are sweet potatoes. We have a self propagating patch about fifty to sixty feet square and it constantly produces and spreads. While they are not genetic mutant enormous 'taters, they are delicious. We make all manner of stuff with them.
B

Duct tape to guard your trees from ant/aphid infestations:
http://www.tcpermaculture.blogspot.com/2011/10/permaculture-tips-duct-tape-cure-for.html

I recently regained my garden; the solar project involved driving trucks and cranes through it, so for two years it's been fallow. It's about 25 by 35 feet.

I haven't yet put up the dual level electric fence (low wire for little guys, high wire for deer), which I have to get done.

I do mostly organic - I use miracle grow almost exclusively for transplanting, but for the rest, nope. We put roughly 8 tons of organic material on it a year for decades, that soil is like money in the bank. We just let it compost in place, which works well except for not killing weed seeds - but a thick layer of hay and other organic material between the plants makes weeds very easy to pull - they're growing in the decaying hay/horse poop, etc, not the dirt. A tiny tug and they are out to rot on top of the rest.

I also do the "plant a fish under the corn" type of thing - I will add blood and bone meal in about half a cubic foot of dirt I dig up before transplanting - so it's as though my plants are growing in pots of super rich dirt, made of the regular garden dirt which itself ain't shabby. It becomes a case of plant and stand back so you don't get hit by the instant growth.

This led to a problem this year - I had my tomato plants dug up nightly by, I'm guessing, racoons, to get to the bone meal/blood meal. This is a real problem.

My fusion partner had given me one of those passive IR driveway entry detectors, which was useless for me - cats like walking the driveway and making it false alarm.
So I put it on a post by my tomato plants, left a window open last night w/o a screen, and parked a flashlight and .22 rifle at the window. Guess what - no digging, I guess the pole itself acted as a scarecrow(!). It would see deer from a long way off, so I'm going to leave it there.

Re potatoes - I always get as many as I want just doing the usual thing - and I rarely if ever have bought "sets" - I just grab the potatoes that start to grow in the kitchen, cut the eyes out and plant those. The only reason at present to grow them at all is that the small, young, almost skinless ones are very tasty - potatos are real cheap at the store, so I don't devote much space to those, preferring higher value crops. A thing about potatoes - they like acid soil, nothing else much does. I use pine needles for mulching them for that reason, but then you have a space where most other plants won't grow. In fact, many years there is no need to plant them, as you fail to get all of them the previous harvest, and those grow back just fine.

For other acid loving things (blue berries, raspberries, strawberries) I just have a separate bed where I can make the Ph real low....and keep it that way.
B

well folks, our chickens have laid waste to the insect population around and near our garden. I have never seen such a precipitous drop in insect sightings before. These guys are absolutely voracious, and with my four turkeys in tow, and four ducks as well, the bugs don't stand a chance. For those who live in areas where the local Nazi party won't allow chickens, they have usually neglected to include turkeys and ducks to that list so they become an alternative for you. Aside from getting loads and loads of eggs, when they stop laying, we eat them.
J 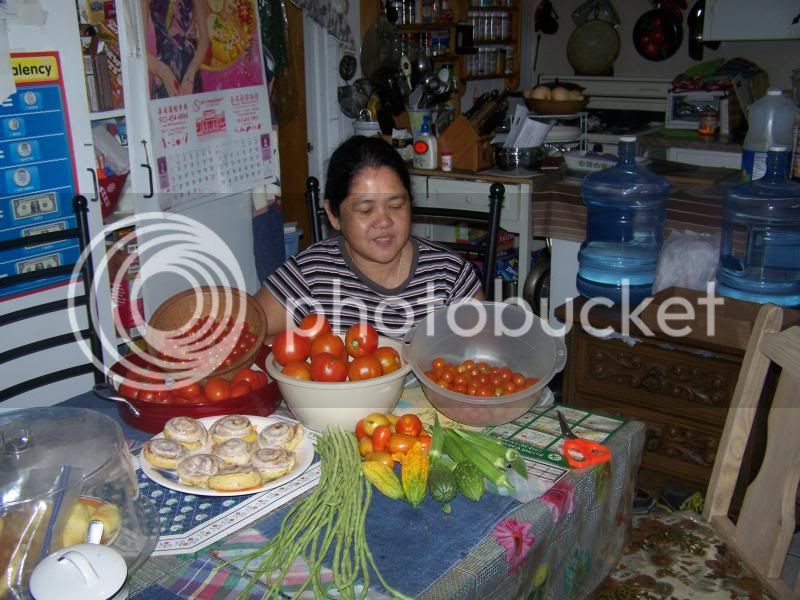 The above article breaks down a few examples of each of the 6 crop groups. Does anyone have a bigger breakdown?

I have one somewhere Benjamen, but haven't referred to it in a while now. we simply allow a third of the garden to be fallow each season and rotate crops through the other two sections. When fallow, we plant clover as densely as we can then plow it in.

I need to quit staying up late and waking up late, and revive my garden. I have a huge back lot and can fit fifteen 4'x8' raised beds with plenty of room to walk between. I use the "intensive gardening"/Square Foot method.

The problem down here in FL is that by the end of May, it's too hot to grow most things, and I always forget to start my seedlings in time for the August/early September planting and get caught by the frosts in late December.

I figure I have enough room to not only give my favorite neighbors a plot, but make enough to barter with if we go back to the 19th Century after a collapse. I just hope I don't get shot for trespassing while getting water from the lake a block away if that comes to pass!

Coin Explorer,
Here on the Space Coast, we still grow a few things through the hottest months, but usually just herbs, greens and tomatoes. Fall, Winter and Spring are when we really produce. growing food on a giant sand bar is tough sometimes, and keeping Ph below 7 is tougher, but we work at it anyway. At 6k s.f., ours is larger than most, but we do what we have to do. The savings is astounding when you look at how much produce you no longer pay for. We do everything in our power to source free manure and compost materials so we seldom actually buy anything. You can also join seed exchanges and wind up with a thousand different varieties of heirloom foods.

Gardening rocks, but as you point out, the summer here is too fucking hot to do anything outside.

I am around five miles from the Indian River, so salt becomes an issue in the summer when it gets windy, but this season we've gotten enough rain to wash it out. in drought years it is another thing altogether.

Oh god, the sandy soil. That's why I built raised beds and used the "lasgana" method of composting. I got a really good deal from a local place on 2 cubic yards of semi-composted soil to start me off.

Oh, a good resource for you and me is the Florida Gardeners forum on GardenWeb. Folks there regularly run seed/seedling/cuttings swaps in various parts of the state. (Not sure how active the forums for other states are.)
J

CoinExplorer said:
Oh god, the sandy soil. That's why I built raised beds and used the "lasgana" method of composting. I got a really good deal from a local place on 2 cubic yards of semi-composted soil to start me off.

Oh, a good resource for you and me is the Florida Gardeners forum on GardenWeb. Folks there regularly run seed/seedling/cuttings swaps in various parts of the state. (Not sure how active the forums for other states are.)
Click to expand...

lived in St. Pete for ten years. the irony is that, although I never gardened then, plumeria grow almost wild all over St. Pete. Growing them is now my hobby, but in central Texas they have to be protected in the winter. When we bought our house here, I dumped truckloads of turkey litter from the nearby turkey farm, and truckloads of sawdust from our sawmill, all the chicken poo from our fifty chickens, and the five hundred or so bags of leaves our neighbors put on the curb every fall. this all composted down to make a rich topsoil, now we don't dig it, just clear a space for the plant. But the summer heat is brutal.
Last edited: Sep 20, 2013

What I've always been envious of about St Pete is the jacaranda trees growing in the old sections of town. Those masses of purple are just fantastic.

The guy down the street has a frangiapanni tree that flowers once a year. When it does it is absolutely stunning to look at, and the flowers really last a long time. When it isn't blooming however, it looks like a gray collection of those long balloons with one or two spindly leaves on the end of each big fat branch. I hate it for the rest of the year.
J 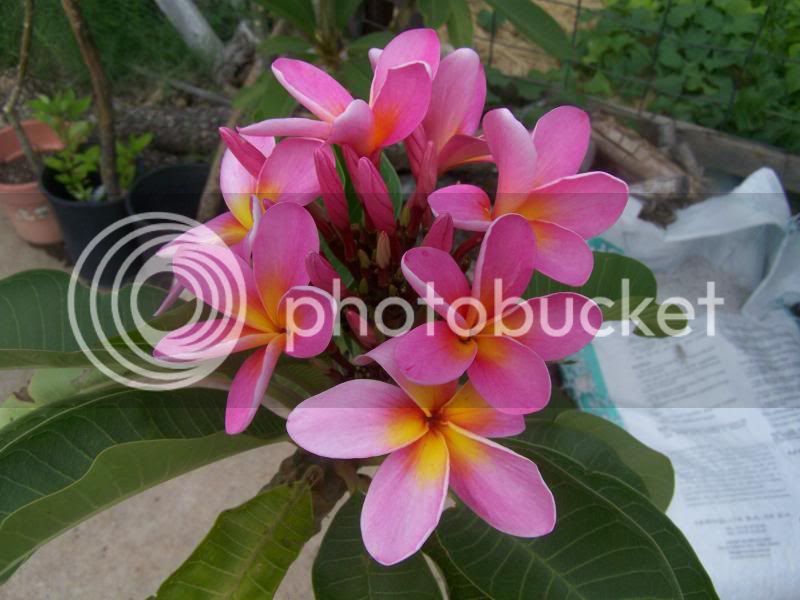 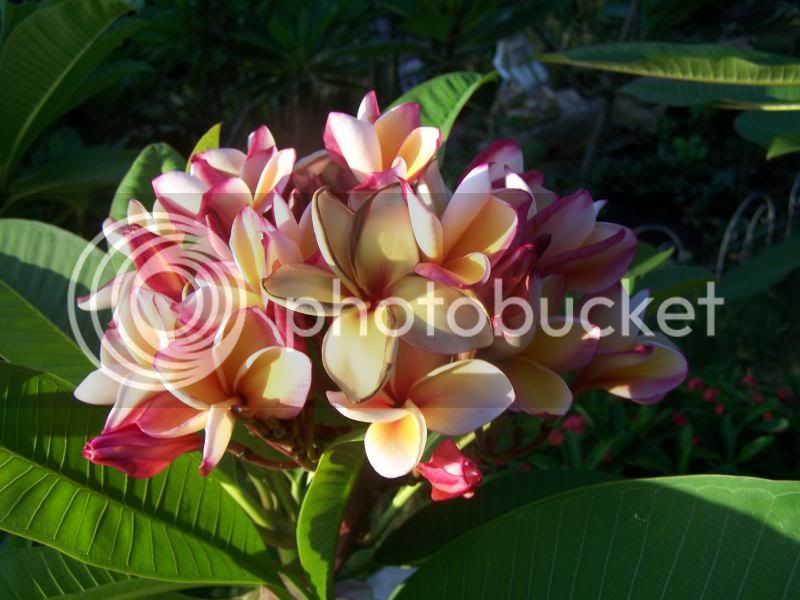 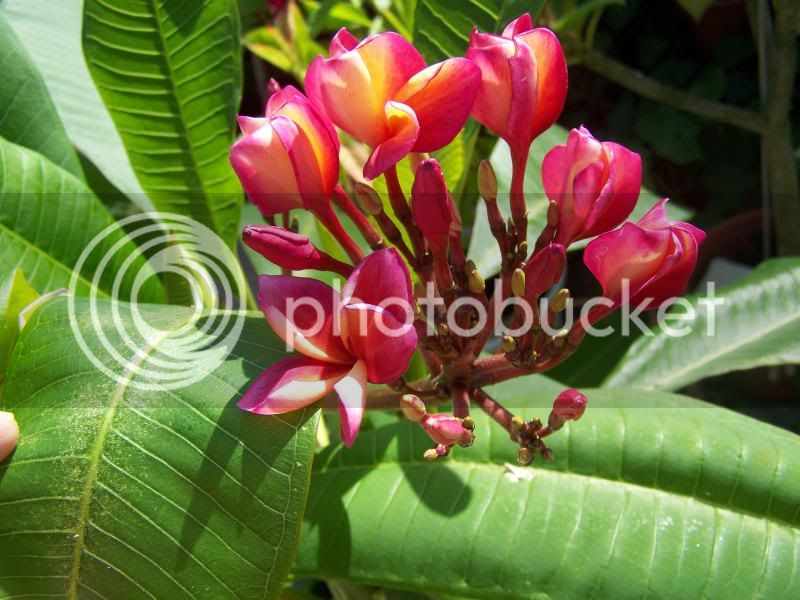 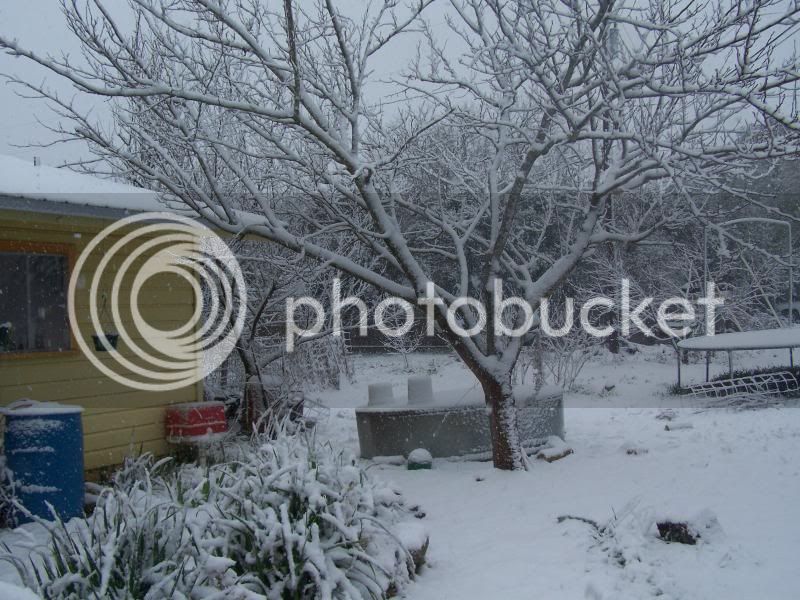 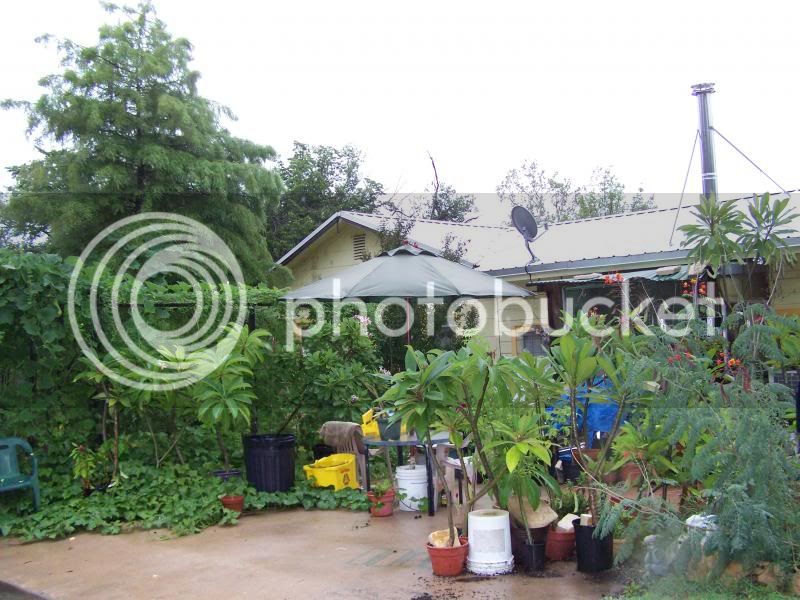