Those poor athletes think they're winning gold when in fact they're getting (mostly) silver :flail:
Side issue: The Economist doesn't understand inflation :flushed:

Podium values
All that glisters
How much is an Olympic gold medal worth?
THE gold medals that will be awarded in London this year will be the biggest and heaviest handed out at any summer Olympics. At 400 grams (14 ounces), the equivalent of having a large tin of baked beans hanging round your neck, they will be more than twice as heavy as the average of the previous five games, and almost 17 times heavier than at the 1912 Olympics in Stockholm.

On the other hand, the 1912 games were the last one where gold medals were made entirely of gold. Now they consist mainly of silver with a thin coat of gold. Winners in London are advised not to bite too hard on their medals, as they will have a gold content of only about 1.5%. Host cities’ organising committees decide the exact design and composition of medals but the International Olympic Committee sets certain rules: gold medals must have a 92.5% minimum silver content and contain at least six grams of gold. In London, copper will make up the rest.

Taking the current price of gold and silver, a London gold medal will be worth $706. Calculations by The Economist find that this is much more than the “podium value” of any previous gold medal (based on rough estimates of the composition of medals and bullion prices at the time of each games, adjusted for general inflation). This is partly because gold and silver prices are now historically high and partly because this year’s medal is so much heavier, even though the extra weight is silver rather than gold.

Indeed, for the first time ever, the silver in this year’s “gold” medal is actually worth more than its gold content. (This echoes the past in one way: at the first modern Olympics in 1896, winners got only a silver medal.) Moreover, if the metal content of earlier medals is valued at today’s bullion prices, the London gold is worth only just over half of those handed out in 1912 (see chart). 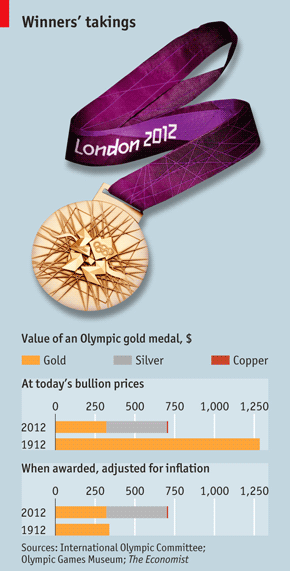 Medals are, of course, worth far more than their weight in gold. On March 29th Wladimir Klitschko, a Ukrainian world heavyweight-boxing champion, raised $1m for charity by auctioning off his 1996 gold medal.
Click to expand...

I wonder if a pound of flesh is still a pound? I await The Economist's brilliant analysis.

You know, if you're spending three or four billion dollars to hist what has been historically a loser as far as revenue, buy real fucking medals for Christ's sake. Why rip off these athletes? Of course, I mean athletes in the truest sense of the word, and those competing in shit like synchronized swimming, and that crap where they jump around with a fucking ribbon, I mean real sports like Greco-Roman wrestling, power lifting, boxing, running, Karate, etc. etc.

I guess it would have to match the Nobel Peace Prize.
S

Bump.
The games are starting today.

From what I've been reading, the athletes have been pretty busy playing (bedroom) games in the village for a while now.
S

You gotta deal with stress and pressure you know
Additionally many of the men have artificially high levels of testosterone (due to doping), that might also drive them to do certain things...
S

Current coverage of the opening ceremony is showing (actors dressed as) miners.


at the first football match they displayed the south korean flag on the big screen as the north korean team were introduced :rotflmbo:

Mitt Romney came over and spoke about how everyone was worried about terrorists and the security company who were suposedly in charge of everything suddenly realised they were hopelessly under staffed ......

Pissed off the UK pols who had already ordered out any spare able bodied army bods, who promptly offered the observation that it was just as well they were there, cos G4S has totally fucked up

Then a pol dropped his handbell whilst being interviewed on the BBC as they tried to set a record for bells ringing simultaenously, having just commented on how well we brits cope when things go a bit wrong

and the french and german press are slagging us off for trying to do it on the cheap in a run down part of london with a crap set of travel options
speaking of which some coach drivers got hopelessly lost for 6 hours, trying to get atheletes from Heathrow to their village

thankfully i dont have a tv, so will not have to suffer much, although theres some speculation that the womens beach volley ball match between Sweden and Brazil is going to be played on some sand in Downing Street, if the weather is nice ............ opcorn:
K

I don't like the non stop commercials on TV but I really do enjoy watching the competition. I was a bit of an athlete myself when I was younger, and competed in numerous sports. I hope the games go well and without some horrible event. Very large audience, perfect for the 'bad guys'.
You must log in or register to reply here.
Share:
Facebook Twitter Reddit Pinterest Tumblr WhatsApp Email Link
Top