I assume everyone has heard that the ECB now has negative interest rates (-0.10) for its member banks' deposits. How long before the banks do the same to their depositors?

LOL @ all the MSM talking heads out there who belittled PMs because they don't give interest.

I saw that too. Cash at the Bank of Sealy now will earn more and be safer than at the normal banks.

And if the Chinese copper & aluminum fakery spreads to gold?

CA$H, Bitcoin and gold should all be held.

Throw in a little Pb and Pt for spice! Also: opcorn:

I was out of town for a few days, and it wasn't convenient to spend time on the internets, so I've been MIA from the forums. This was one news items which I did want to address though.

They finally released the Kraken (one year later).

A former Dallas Fed president wrote a piece in Forbes suggesting that the Fed might have to do the same to handle their excess reserve deposits:

Is the race to the bottom accelerating?

People get excited of wedge issues. But this is my costs to have a roof over my head and go to the grocery store .

The movement is aimless and the goals are murky- for all practical purposes the liberty movement is dead.

That's for sure. The way I see things happening now is a slow burn, then collapse of the markets. After that, the dollar. After that, some nastiness I have no desire to experience.

... As WSJ reports, Tuesday marked another milestone in the topsy-turvy world of monetary easing in Japan: The Bank of Japan bought short-term Japanese government debt at a negative yield for the first time. ...
Click to expand...

...
According to Australia's ABC News, the "Federal Government looks set to introduce a tax on bank deposits in the May budget."
...
Click to expand...

Taxing bank deposits is a great way to insure banks become even less solvent than they currently are. I wonder if they'll start passing laws about how much and how frequently you can withdraw or deposit so that people can't pull their money out and only put it what they need to service a credit card.

We're almost there on a practical level even without laws to specifically enforce that. Banks administrative policies will limit how much you can withdraw at a given time (if you want too much, they will need a few days to have cash delivered so you have to wait). If you can't explain your need for large (or frequent) withdrawals, they might report you to the Feds.

... the Bank of Japan ... unleashed the monetary neutron bomb of Negative Interest Rates in the process pulling an anti-Draghi and shocking markets, even if admitting it can no longer boost QE due to previously discussed concerns it would run out of monetizable bonds in the very near future.

The initial market reaction was one of shocked surprise, with the Yen crashing and risk soaring, subsequently followed by disappointment that QE may be now be officially over and the BOJ will be stuck with negative rates, and then euphoria once again regaining the upper hand if only for the time being as yet another central banks does all it can to levitate asset prices at all costs, even if in the long run it means even more deflationary exports from all other banks and certainly China which will now have to retaliate against the devaluation of its "basket" of currencies.

The BOJ's excuse was simple: everyone else is doing it: as Kuroda said quickly after the NIRP announcement, the BOJ’s monetary policy is “just the same as central banks in the U.S. and Europe,” and “doesn’t target currencies.” Well, it does target currencies, but he is right: it is the same as policy in Europe and the US, where as a reminder, NIRP is coming next.
...
Click to expand...

Yup, it seems more and more of the world is moving to NIRP territory, and even considering upping the ante in the "War on Cash".

Ugh. I just cannot see how this ends well.

The world’s longest experiment with negative interest rates may end up lasting an entire decade.

Not until 2021 at the earliest will Danes have a chance to see positive rates again, according to Danske Bank. The country’s policy rate first dropped below zero in 2012.

Danske Bank senior analyst Jens Naervig Pedersen says last year’s pattern of krone depreciation, which had some economists predicting rate hikes, won’t continue. In fact, he expects the Danish currency to appreciate in 2019. And with the central bank’s sole purpose being to defend the krone’s peg to the euro, a stronger exchange rate makes monetary tightening in Denmark less likely.

Nowhere else have people lived with negative interest rates as long as in AAA-rated Denmark. The policy has protected the currency peg, but it’s also turbo-charged the mortgage market and pushed those trying to save money into riskier assets. Meanwhile banks have done a bit less traditional lending and a lot more wealth management.

The jury is still out on the extent to which negative rates are a useful policy, especially in economies in which the central bank targets stable prices rather than fixed exchange rates. This week, former U.S. Treasury Secretary Lawrence Summers threw his hat into the ring, criticizing the policy because of its apparent failure to stimulate bank lending “due to a negative effect on bank profits.”
...
Click to expand...

Former U.S. Treasury Secretary Lawrence Summers has jumped into the debate about negative interest rates, signing onto a paper that gives the policy -- adopted in Europe and Japan as an emergency tool during the financial crisis -- a damning review.

Negative central bank rates have not been transmitted to overall deposit rates, and a model suggests that tiptoeing into negative territory in a world with such a disconnect is “at best irrelevant, but could potentially be contractionary due to a negative effect on bank profits,” Summers writes with Brown University’s Gauti Eggertsson and Ella Getz Wold and Norges Bank’s Ragnar Juelsrud.
...
While Eggertsson and his co-authors have released prior iterations of this research, Summers is newly appearing as a co-author. That’s relevant, because the Harvard economist is an influential voice in monetary policy circles and has a track record of urging the policy makers to contend with a low-growth, low-interest rate future.

The commentary on negative rates could be well-timed for impact: while the policy has never been used in the U.S., the Federal Reserve is embarking upon a yearlong conversation about its monetary policy framework.

Because research from Fed Board economists shows that America’s policy rate could be around zero about a third of the time going forward, unconventional monetary policies are almost sure to factor prominently in the central bank’s future toolkit. That said, Fed staff looked at negative rates back in 2010 and were unsure if the central bank had the legal authority to impose them.

Summers and his co-authors point to quantitative easing, forward guidance, and credit subsidies as potential alternatives to negative rates as better solutions to fighting a recession with interest rates near zero.

“Our findings suggest that negative interest rates are not a substitute for regular interest rate cuts in positive territory, at least to the extent that these cuts are expected to work via the bank lending channel,” the economists write. “While the existing literature has made progress in evaluating these measures, the question of how monetary policy should optimally be implemented in a low interest rate environment remains a question which should be high on the research agenda.”
Click to expand...

Swedish inflation unexpectedly slowed in January, adding to speculation that the central bank may struggle to end four years of negative interest rates as planned this year.
...
Click to expand...

I can't believe I posted this almost 5 years ago, and there is still NIRP and ZIRP all over the world.

In the interview, Jordan affirmed the ongoing need for a deposit rate of minus 0.75 percent plus a pledge to intervene in currency markets, if necessary, adding the franc remains highly valued. The SNB had the tools to act, he said, should economic conditions deteriorate.
...
The SNB’s interest rates are the lowest of any major central bank and are designed to keep pressure off the franc, which is regarded as a safe haven at times of market uncertainty. A strengthening franc depresses the inflation rate in Switzerland.
...
Click to expand...

Gold would offer a better return I reckon (-; 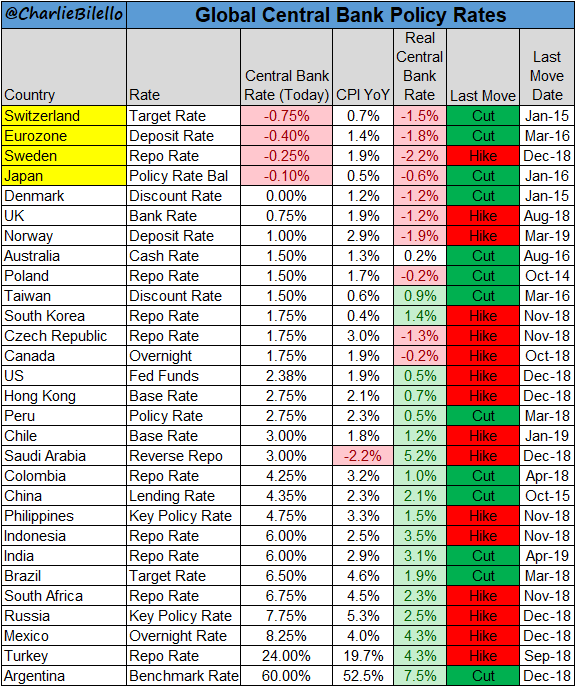 Europe’s unconventional experiment with negative interest rates to spur economic growth and inflation is looking like a trap.

Five years into what was supposed to have been a temporary shot in the arm for the euro area, the European Central Bank still hasn’t achieved its goals and may be about to push rates even lower. Japan, Switzerland, Sweden and Denmark have also stepped over the zero bound, once seen as the lower limit for monetary policy.

With global economic growth slowing, negative rates are staying around. But the longer they persist, the louder the criticism grows. They’re blamed for weakening banks, expropriating savers, keeping dying companies on life support, and fueling an unsustainable surge in corporate debt and asset prices.
...
Click to expand...

...
As top Wall Street banks warn of zero Treasury yields and falling income from lending, their European peers have been dealing with negative rates for half a decade, with an end looking increasingly far off. The drought has left them without a cushion to fall back on when income from trading dries up, as it did in the first half, and it’s one reason why once-mighty Deutsche Bank AG just announced the most radical cuts yet to its investment bank.

The second quarter will probably provide more evidence how damaging zero or negative rates are for an industry that at its core depends on clients paying to borrow money. Revenue at eight of Europe’s top lenders is set to decline 2.7% on average from a year earlier, according to filings and analyst estimates. ...
...
Here’s a guide to what investors will be looking for when the top lenders start to report on Tuesday:
...
Click to expand...

It is no longer absurd to think that the nominal yield on U.S. Treasury securities could go negative. Last week the German 30-year government bond yield dipped into negative territory for the first time ever. Around $14 trillion of outstanding bonds worldwide, or 25% of the market, now trade at negative yields, according to Bloomberg. What was once viewed as a short-term aberration – that creditors are paying debtors for taking their money – has already become commonplace in developed markets outside of the U.S. Whenever the world economy next goes into hibernation, U.S. Treasuries – which many investors view as the ultimate “safe haven” apart from gold – may be no exception to the negative yield phenomenon. And if trade tensions keep escalating, bond markets may move in that direction faster than many investors think.
...
Taken together, recent developments have increased the odds, in our view, that a “mid-cycle adjustment” of the fed funds rate similar to the mid and late 1990s (when the Fed cut rates three times) may not suffice to stabilize growth, but that last Wednesday marked the beginning of the next major Fed easing cycle. To be sure, so far this is only a possibility rather than a probability. But if the Fed cuts rates all the way back down to zero and restarts quantitative easing, negative yields on U.S. Treasuries could swiftly change from theory to reality.
Click to expand...