It has already been mentioned in another thread by PMBug and others that India's moves to curb gold sales has been sparking greater demand for silver, but I think if this trend continues this year it will have such a big impact that I thought it deserved its' own thread.

That means on average there's about 2600 tons available a month. (However China mines 300 tons+ a month and they are still net importers - http://www.silverinstitute.org/site/supply-demand/silver-production/)
So there are actually only 2300 tons of silver supply available on average per month.

Over the last five years they have averaged imports of 3000 tons a year, or 250 tons a month, which equals about 11% of total demand.

Now this year just between January and May they've already imported 2400 tons! But that's not the most exciting part it's how those numbers have been increasing throughout the year...

According to industry estimates, silver imports during the January-March quarter stood at 760 tonnes. Imports shot up 720 tonnes in April alone, and in May, they further swelled by 920 tonnes.
Click to expand...

If silver prices stay low and India continues to curb gold sales (which they will) I wouldn't be surprised to see this level of demand continue & even increase!
J

I wanted to post something similar (posted that thread yesterday) but I don't follow all the threads and frequently post something thats old news! (sorry, Mods)
M

Well my wife is indian along with all of her family.

With the recent slam in Gold I bet they are going to be big buyers come wedding season.

Last year and especially the year we hit near 1900 there was definitely a lot of silver buying.

In fact Indian jewelers were making gold/silver jewelry so they could sell while keeping prices down.

I'll chime in after I speak with them some more this coming season.

India is also the biggest consumer (internally) of gold - as I know from the media...
Europe is doing pretty bad in case of silver - few people buy, not that popular, huge premiums and VAT applied on all silver!

I posted this in another thread, but this topic could get interesting, thus I have begun a new thread [edit: added to Unbeatable's thread].

More news about India and silver:

As India continues to wage war with gold, investors are seeking out the yellow metal through any means available.

Recent reports suggest that there is not enough room on commercial flights into Dubai for all those investors seeking to purchase gold.

“I cannot find a place for transporting gold on Emirates, on BA or Swiss Airlines this weekend,” lamented Tarek El Mdaka, the managing director of Kaloti Gold in Dubai adding he is shipping as much as 2 tonnes of gold every day.

As we had suspected, it would appear that the Indian gold trade has moved offshore to avoid the restrictions on imports and extra taxes imposed. However, this is not the biggest change in the Indian precious metals market – silver imports have exploded.

Silver has not been exposed to the same import restrictions that gold has and recent silver import figures confirm that investors have flocked to silver, likely as a substitute for their desire for gold. And why shouldn’t they?

With limited bank branches in the country, owning precious metals is synonymous with savings and security.

While it seems that the larger investors have moved their gold purchases offshore, we suspect that the majority of Indian investors have turned to silver as a substitute for gold. The recent import numbers are staggering.

While India imported 1,900 tonnes of silver in 2012, in the first five months of 2013 alone, imports have touched 2,400 tonnes. According to industry estimates, silver imports during the January-March quarter stood at 760 tonnes.

Imports shot up to 720 tonnes in April alone, and in May they further swelled by 920 tonnes.

Let’s put these numbers in perspective, according to the Silver Institute, the world produced 24,478 tonnes of silver in 2012, implying that Indians have imported almost 10% of world production so far this year.

If they continue to import at the same rate as they have in May, over the next 12 months India could import close to half of world silver production which is a truly staggering shift in demand for silver.

The next salvo in the war on gold occurs this Monday July 1st when “The All India Gems and Jewellery Trade Federation” (representing 90% of jewelers in India) declares a ban on its members selling gold bars and coins.

It’s almost unbelievable that this retail federation would impose an all-out ban on purchasing gold for investment purposes, but all is fair in love and war. However, Indians aren’t phased and are shrugging off this ban and investing their rupee’s in silver instead.

This new import data shows that the victor in India’s “War on Gold” – will be silver.
Click to expand...

Unfortunately the silver import numbers fell sharply in June though with the restrictions from what I gather. And I would imagine it's probably easier & more profitable to smuggle in gold.

Their May numbers were epic though, just shows you how quickly physical demand for silver can blow through the roof as soon as there's a small catalyst.
U

Silver imports in July, coming in at 274.92 metric tonnes, have been termed the highest in the last five years.
Click to expand... 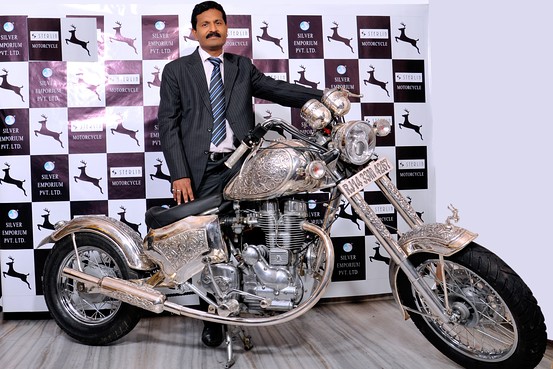 An Indian company is offering custom-built motorcycles covered in silver that will cost between five million rupees ($81,169) and 10 million rupees, depending on the brand
Click to expand...

Sprott: “There is an interesting thing going on there, Eric. We get data out of India. They consumed slightly less than 2,000 tons of silver late year. It would appear they are going to consume 6,000 tons this year....

“It might be a little early for me to say that because as gold has been restricted, that number might even be well above that (total of 6,000 tons of silver). In the first 8 months there were something like 4,000 tons (already consumed), so we are just extrapolating that trend, but the trend was gaining strength as the year went on.

But when you (as India) buy an extra 4,000 tons of silver in a year, you are buying an extra 17% of the (entire global) market. So we have a new entrant into the (silver) market who takes down 17% of the supply, and the price goes down. It’s the same analogy as China buying gold. They (China) buy 25% more of the (entire global) market and the price (of gold) goes down.

Those things don’t hold together. Logically this should not happen (the price of silver going down). So, I’m very optimistic on silver. The US Mint silver sales have just been booming here. They are still 50/1 in terms of the physical relationship to gold at the US Mint. We (only) produce 11-times more silver (than gold). We (only) have about 3-times more silver (available) for investment, and yet investors, via the (US) Mint, are buying it at a 50/1 ratio to gold. That cannot persist too long without the price of silver going up (substantially).”
Click to expand...

Since India has made it such a royal pain for their people to buy gold, the natural progression would be to turn to the next most common PM, so silver will become their new darling. Even if the government increases import duties and fees, it is still relatively "cheap" in comparison to gold, and so it could potentially be consumed at a far greater rate.
A

Third world countries are getting squeezed with what the Fed and our Congress are doing with the dollar. What else can they do? You would have to be crazy to want to hold Rupees.
You must log in or register to reply here.
Share:
Facebook Twitter Reddit Pinterest Tumblr WhatsApp Email Link
Top