Freedommunitions.com has finally shipped my order after a 3 week backlog, plus they have been sold out of everything they make for almost the same length of time. I'm hoping they get back in service soon! Lambone needs some more 300 blackout!

Yeah, I like CCI mini-mag for most guns, stingers for pistols. And anything that comes bulk is going to have a bunch of half-bent rounds in it. Not worth it.

A friend in the ammo biz tells me her company is just beginning to catch up to the point of allowing backorders again. She shared us a pic of a box of about 10k rounds of 5.65 they had just turned out. She says demand is just through the roof, and her small company is one of the few who can even get the supplies to make ammo at this point, and had had a lot in stock already.

She says it's just plain demand from dealers - everyone caught off guard by it.
Brass is made by most companies in rotation, eg we make this type this month, that type next month and so on, estimating to make enough of each to last till the next time that caliber comes back into the rotation. They don't just make one type all the time except for a few rare instances - it takes a lot of steps on a lot of machines (capex) to make brass from a slug punched out of a plate, so they don't have a set of machines per caliber.

Primers have been in super short supply, but she had plenty (by her standards, some few tens of thousands per type). Bullets and powder not so bad.

She's pretty happy just now - she labelled that picture "gold" and to her, it is - and it's all spoken and paid for already.

Bishop ammo if anyone cares, in CA. I've talked to them for hours while they QC the day's production on video chat. I'm impressed enough with their technique and care to probably even buy some of their product myself once it's back in stock - even though I can make my own cheaper. Never any harm in having a little extra, and they use premium brass I can reload with confidence.

It's just going to take a little time, like all the other times. Panic buying creates artificial shortage in this JIT world.
J

Local Red Top Bait shop. NOTHING on the shelf except one box of twelve gauge and a battery charger. The huge storekeeper said this is just a scam by the NRA to raise ammo prices, everything will be back double price in a few months. She also said she hopes they ban those assault weapons, no one needs an assault weapon.

If management at a local mom & pop store were espousing such opinions in my home town, I wouldn't patronize them any more.
J

If management at a local mom & pop store were espousing such opinions in my home town, I wouldn't patronize them any more.
Click to expand...

Cains' rock was the original recorded assault weapon. I don't patronize them, stopped by looking for .308. She looks like shes gonna do herself in without the need for help from a gun anyway

Weve been there before and once again, it'll pass. Not having any problems here in Greenville, SC. Supplys are down, but not out.
J

Just came back from the local range (never been there before, cause usually I can shoot free at my friends ranch). This was by invite; I sure like the range. Guy next to me had a canned .308 shooting subsonic, you could barely hear it. With super sonic he was hitting the steel at 1000 yds. (This was all new to me, yeah, I'm easy ) The gun shop there had all calibers at regular, pre-freakout prices. Got five boxes of .308 Federal 20. each (actually he said they used to be 16.) But still glad to get them. No ammo in Burnet or the neighboring town.

Glad I bought that progressive press a few months ago!

Been reloading 5.56 and .45 pretty regularly. It's been a good investment so far!

Big backorders on most supplies, though. There's not much at all in stores here in NY... and a few companies won't ship to NY even though it's not illegal yet.

I am so completely fucking pissed about the unconstitutional NY gun bullshit that I want to go all baseball bat on someone. Did you read about the decorated marine vet that was arrested and charged as a violent felon for simply posessing five empty AR-15 magazines?

These people are insane and should be exorcised from the face of the planet.

Yup -- that was just north of me. Watertown, I think.

They *waaaaaay* overstepped their reach on that one.

You should see some of the public information meetings going on up my way. This one is from Buffalo and is pretty representative of every meeting north of White Plains:


That' the abridged version with soundtrack, etc.

There's a room full of patriots My kind of people.

Maybe I should re-post this in the SHTF room... I'm a little off topic here.

Absolutely correct ADK. The mood is the same here in Florida. The People have hadit up to their chin with these power grabs by the executive class, the TSA and DHS, even with local police buying tanks and military style weapons. It is all just a giant ball of fuck as far as I am concerned, and I can't wait for it all to come apart in to a giant smoking heap.
B

Steering us back towards the original conversation, the local prices on semi-auto rifles, magazines, and semi-auto ammo is crazy!

I found some ammo, but it was insane prices.

The gun shop looked like it was in going-out-of-business mode. No weapons to speak of and it has been virtually stripped of gear. I've never seen anything like this before......ever. It's spooky actually.

My fusion partner just found a few K primers, while on the road in the FLA area. But that was it. Glad we'd already stocked up.
J

Ammo has loosened up the tiniest bit around here......finally. My buddy called me from the gun store and asked me if I wanted some boxes of .223, so I had him pick up five for me [that was the limit per caliber] along with a carton of .22 and five boxes of 9mm. I hope it gets better than this soon because I miss the days of being able to roll down to the range and blast away to my hearts content.
J

yeah, we haven't gone out shooting cause of that. Ended up "trading" the steel cased Tuli (one case) for .308 and 30-06 brass cased. I paid six dollars a box for the .223, I think (its been so long I can't really remember) and he gave me 15 a box in exchange. I think I came out ahead financially; I certainly came out ahead on ammo as I don't have anything that will shoot that stuff. (and on a numerous note, I only have a single shot .223 so I'd be a month trying to shoot a case). Did your prices come down?
J

took two van full of my kids and wifes friends to Ruidosa NM to go snow skiing for spring break, but no snow. (they had reserved the cabins months in advance.) No loss, we went to white sands and played in the sand, and the snow we didn't have to pay for at Cloudcroft. 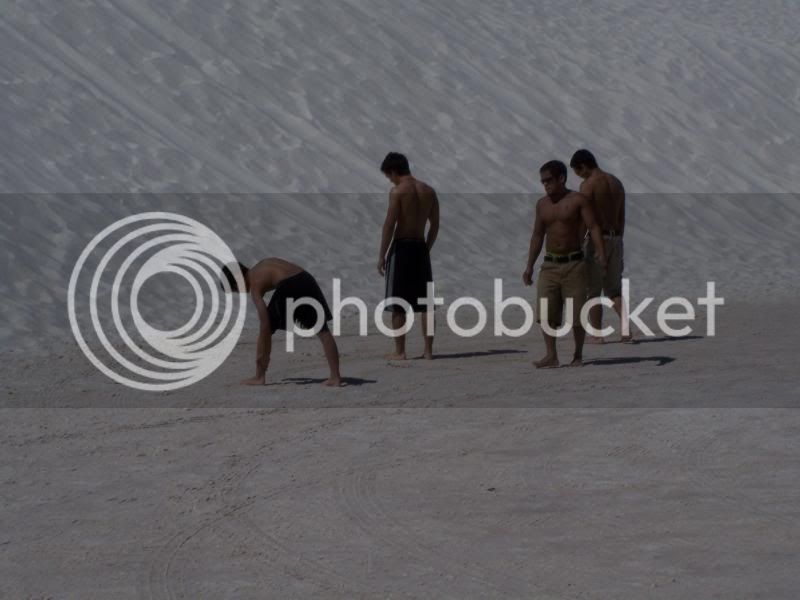 Checked out the gun stores while we were there, Goth hippy chick had every caliber you could imagine, and lots; 30.00 for 20 rnds federal .308. She said the ONLY customers she had anymore were people driving from Texas to get ammo. Ruidosa was different; no ammo I could find anywhere, but the guns were way cheaper than here in Burnet Texas. One shop had five black rifles behind the counter, 495 each (no scopes). Every rifle I looked at out on the floor was about half the price of here at home (but no visible ammo in the shop, except for a few boxes behind the counter).

Exciting trip, saw a bald eagle, old lady driving the wrong way down the interstate, and the rear driver tire on the van de-laminated at about 85 mph outside of Big Spring, Texas; the shrapnel tore off the rear taillight assembly, rear bumper, etc. Actual tire never lost any air.

Everybody safely at home, all is good.

Went to the gun show this weekend. Plenty of AR's at super high prices (up to abut $2700), but no one was buying them according to the vendors.
Uppers were going for $500-800, about normal, but these weren't the really nice custom ones - that guy wasn't there.

Ammo less than "normal" but there - mostly all NATO and .40 calibers. One reloader supply place there (usually 2-3) and he had the normal stuff, though he did laugh and point to many empty cases of powder - it'd been open about 3 hours, and maybe 20 boxes of 1lb cans of powder had been sold already - perhaps 12 cans/box.

I didn't buy anything myself, other than a fire starter. The good MRE guy wasn't there either. I'm already "stocked up" and nothing particularly caught my eye other than some night vision stuff that looked too expensive for what it was (and I have other sources for that kind of thing).

The place was extremely crowded, though.

Edit:
I "just happened" to have an AGE and a ASE in my pocket when I went. For giggles, I pulled one or the other out at various vendors to see if they'd accept one (and in some cases, they'd have had to make change). No takers whatever - some astonishment on their part however. There was a coin dealer there selling mint-direct ASE's for less than APMEX, however.
Last edited: Mar 18, 2013
B

I went to a local gun store over the weekend. They were completely out of every type of common ammo you can think of: .223, 9mm, 38special....

They were equally wiped out of most semi-auto pistols and rifles. What ever they had left was priced extremely high. When I commented on the prices, the guy told me he couldn't get in new stock if they sold.