Yeah, I'm quite sure they would not have delcared a credit event if they weren't 100% sure that the CDS didn't pose any systemic/contagion risk. That ruling was for PDVSA bonds that didn't get paid. It remains to be seen what happens when they have to rule on the Venezuelan government itself.
B

"I waited four hours to get 6 cents"

The Venezuelan currency will rise, many will invest in that country again. With the arrival of Petro things will be different!

Hi Christian, you live in Venezuela? How about a first hand report on what is happening in your country? I must say that I'm a bit surprised at your optimism. I don't see any foreign investment headed to Venezuela without a regime change and some established stability.

...
Amid severe scarcities of basic goods, some hotels here have begun rationing toilet paper. Crisis-battered Venezuelans on local escapes, meanwhile, have graduated from stealing towels to pocketing lightbulbs and even coffee makers. Some resorts force guests to sign contract-like inventory lists and submit to detailed room inspections at checkout.
...

... But critics also tie the economic nosedive to maneuvers by Maduro — the handpicked successor of left-wing firebrand Hugo Chávez, who died in 2013 — to establish near-dictatorial powers.

Despite the government's iron hand, street crime is surging. *Locals who can afford it are outfitting their vehicles with bulletproof glass and armor, and traveling in caravans on the bandit-infested highways. In 2017, 53 people a day were killed in Venezuela, according to the Interior Ministry, making it one of the world's most dangerous countries.
...

For those tourists who aren't put off by the crime, the shortages or the sight of people clawing through garbage cans for food, there is still one more problem: getting here.

Only 15 international airlines are still flying to Venezuela. More than 15 others have pulled out in the past two years, citing economic concerns and security troubles, including stolen luggage at airports. ...
Click to expand...

You can't get $1 out of the bank in Venezuela. I tried.

The U.S. Treasury Department on Tuesday warned that Venezuela's proposed "petro" cryptocurrency could violate sanctions against the OPEC nation's socialist government, a statement that could dent investor appetite for the soon-to-be-launched token.
...
Click to expand...

Minister of State, Joseph Harmon told Demerara Waves Online News that reports that Venezuela had been planning an incursion into Guyana’s territory was being factored into government’s analysis. “Of course, as a nation, we have to take all of these things into consideration. We cannot disregard any reports like that,” said Harmon, a retired Lieutenant Colonel of the Guyana Defence Force and current member of the Defence Board.

Region One (Barima-Waini) Chairman, Brentnol Ashley said there was no evidence of increased Venezuelan presence on the border with Guyana since the UN Chief’s decision. “To date, we haven’t had any reports…we haven’t seen, nor have we received any reports to that effect,” Ashley said.

Word that Venezuela was exploring options to flex its military muscles against Guyana had coincided with a high-level visit to Guyana by Brazil’s Minister of Defence and several military chiefs earlier this month. “It is not by accident that such a large and high level delegation came to Guyana,” Defense Minister Raul Jungmann Pinto.

Brazil’s historical position, in support of Guyana’s territorial integrity and sovereignty, has always maintained that it would not support an alteration of its borders.
...
Click to expand...

Are they imploding yet? It sounds like they are imploding...

...
Maduro faces a May 20 election with support from only about a fifth of the population and he is turning over swathes of the economy to the 160,000-member military, the strongest power in a failing state. Active and retired officers hold 14 of 32 cabinet posts. Soldiers have replaced many of the 80 state oil company leaders whom Maduro has imprisoned since August. The ports have been militarized and the Defense Ministry oversees the hungry nation’s food supply.
...
Click to expand...

A similar strategy that Trump seems to have adopted then ?

Ok he hasnt put soldiers in charge of commercial operations but he does seem to want a cabinet that is centered around individuals with military interests.
S

... and putting troops on the border.
M

rblong2us said:
A similar strategy that Trump seems to have adopted then ?

Ok he hasnt put soldiers in charge of commercial operations but he does seem to want a cabinet that is centered around individuals with military interests.
Click to expand...

Since the primary focus of the federal government SHOULD be national security, it makes total sense to me to have his advisors be 'experts' in security.

Agree mmerlinn
but what if, as president, you feel threatened by others from within the state ?
Its a small step to go from national security to the thought that 'as president I am part of the nation and need to feel secure' .......

The European Commission will give the government of sanctioned Venezuelan president Nicolas Maduro around $47 million.

The funds are designed to go to Venezuelans and countries receiving Venezuelan migrants, the European Commission said in a note on Thursday. Neven Mimica, Europe’s commissioner for international cooperation and development, said: "We are very concerned about the critical situation in Venezuela and its impact in neighboring countries such as Colombia. This package will improve the Venezuelan people’s access to food and nutrition, as well as basic services like water, sanitation and hygiene.”

Last year, Maduro rejected calling the crisis a humanitarian crisis, saying he would not apply for aid from the international humanitarian aid organizations. (He undoubtedly thinks nonprofits like Oxfam International are crawling with Yankee spies.)

Out of the funding announced today, $5.9 million will go to healthcare, food and water. Another $5.9 million will support conflict-prevention measures to reduce social tensions and violence and protect people displaced by the crisis, a crisis Maduro largely blames on Washington.

Some $22 million is going towards development assistance in Venezuela and to neighboring nations housing migrants. Another $8.3 million is supposedly going solely to meet the needs of migrants. The European Commission's humanitarian aid department has been providing emergency support to Venezuela since 2016. They did not say who specifically was getting the money. If it is going to the Venezuelan government, then one can safely assume that it is money gone to waste. The EC has been throwing money at Maduro and the ruling Socialists United of Venezuela (PSUV) for two years now and the food and medical supplies situation has only deteriorated.
...
Click to expand...

Faced with nearly incomprehensible inflation — 32,714 percent as of Wednesday — Venezuelan officials thought they had a solution: They changed the color of the bank notes and increased their denomination. Then they said they would lop off three zeros. And when that didn’t seem enough, they announced they would cut off two more.

The tactics have left Venezuelans like Yosmar Nowak, the owner of a coffee shop in Caracas, convinced that there is no solution in sight and that the government cannot even bring down the price of a cup of coffee, an eye-watering 2 million bolivars.

“I imagine if we keep like this we’re going to have to do the same thing in December,” said Nowak, who has been forced to raise prices in her cafe at least 40 times this year.

Slashing zeros from Venezuela’s inflation-cursed currency, the bolivar, is the tent-pole of a set of economic changes by President Nicolás Maduro as he tries to right his country’s capsized economy. The five-digit inflation has earned Venezuela comparisons to the hyperinflation of Zimbabwe and Weimar Germany from the International Monetary Fund.

The newly minted currency, which will be known as the “sovereign bolívar,” will be rolled out Monday. In addition, the president has ordered measures his United Socialist Party has been loath to consider in the past: An increase in gas prices for some drivers and a modest ease in the currency controls that have made dollars inaccessible to most Venezuelans for years.
...
Click to expand...

It's not the same as the famous photos of wheelbarrows full of cash, but it's pretty close: 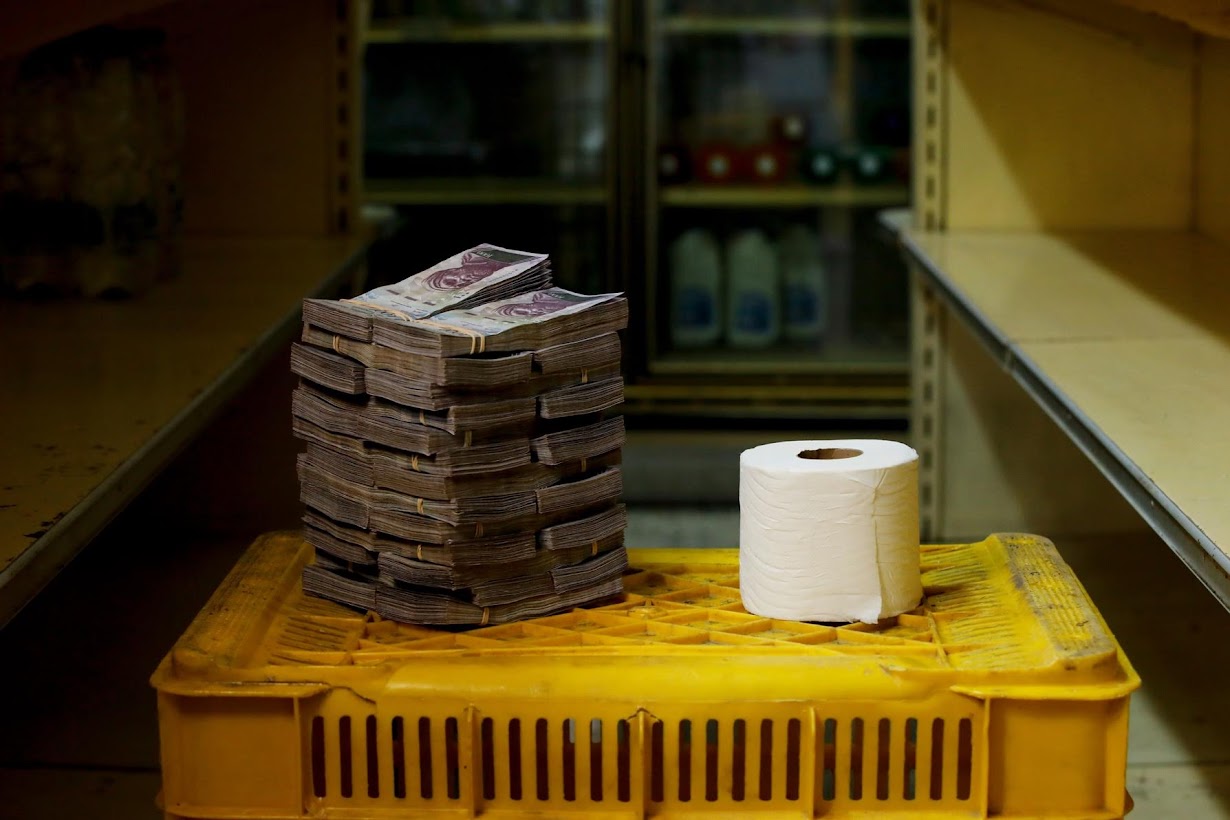 Venezuela came to a standstill on Tuesday as the country tried to deal with its newly introduced currency.

Thousands of businesses closed in order to adapt to the "sovereign bolivar", and many workers stayed at home.
...
Click to expand...

...
The UN estimates that 2.3 million Venezuelans have fled since 2015 with Colombian authorities predicting 2 million more could follow by 2020. That would mean some 4.3 million people – 14% of Venezuela’s population – had taken flight.
...
Click to expand...

PMBug said:
It's not the same as the famous photos of wheelbarrows full of cash, but it's pretty close:

I'm thinking it would be better to use that cash itself as the TP, as it seems there's more "sheets" to wipe with using the stack vs. that roll.
S

In ZH, the article says the same thing, 2.5M for tp but notice the caption for the picture says 5M...

The material used to make banknotes is not as good at eerr, clearing up and would likely block your drains, requiring a visit from a plumber, who would probably demand payment in TP ...........
S

mmerlinn said:
Since the primary focus of the federal government SHOULD be national security, it makes total sense to me to have his advisors be 'experts' in security.
Click to expand...

I disagree, the primary responsibility of the federal government should be protecting the natural, inalienable rights of the individual.

Minister Simon Zerpa told Bloomberg News that Venezuela would pay back the loan with either cash or oil. The countries were expected to sign what Zerpa described as a strategic alliance on gold mining.
...
Click to expand...

A "strategic alliance on gold mining"?

The order, signed Wednesday by Trump and announced at a speech Thursday by National Security Adviser John Bolton, targets people operating corruptly within Venezuela’s gold sector. It’s expected to significantly impact the country’s economy, according to a senior administration official who requested anonymity to discuss the announcement before it was made.
...
The Treasury Department is expected to outline implementation of the new Venezuela sanctions authority later Thursday. While the initial effort will focus on the country’s gold sector, Trump’s order gives the State and Treasury departments authority to target additional industries in the future.

“The new sanctions will target networks operating within corrupt Venezuelan economic sectors and deny them access to stolen wealth,” Bolton said. “Most immediately, the new sanctions will prevent U.S. persons from engaging with actors and networks complicit in corrupt or deceptive transactions in the Venezuelan gold.”
...
Venezuela’s gold industry has been under scrutiny by U.S. officials in recent weeks, with the Treasury Department noting that many mines are run by criminal gangs, a situation that is environmentally disastrous. The sanctions are likely to have a particular effect on trade with Turkey, with tons of gold sent there annually for refinement and processing. Officials have also voiced concern that some of the gold may find its way to Iran in violation of sanctions on the Islamic Republic.
...
Click to expand...

Completely absent from media reports about the sanctions - any reference to Venezuela's "strategic alliance on gold mining" with China.