The top U.S. derivatives regulator voted today to curb trading in oil, wheat, gold and other commodities after a boom in raw-materials speculation, record- high prices and years of debate and delay.

The rule has been among the most controversial provisions of the Dodd-Frank financial overhaul, enacted last year, which gave the Commodity Futures Trading Commission the authority to limit trading in over-the-counter commodity swaps as well as exchange-traded futures. The proposal would limit the number of contracts a single firm can hold.

“Our duty is to protect both market participants and the American public from fraud, manipulation and other abuses,” Commission Chairman Gary Gensler said in support of the rule. “Position limits have served since the Commodity Exchange Act passed in 1936 as a tool to curb or prevent excessive speculation that may burden interstate commerce.”

The rule limits traders to 25 percent of deliverable supply in the month nearest to delivery. The spot-month limits apply separately to physically settled and cash-settled contracts. Deliverable supply will be determined by the CFTC in conjunction with the exchanges.
...
Outside the spot month, the caps limit traders to 10 percent of the first 25,000 contracts of open interest and 2.5 percent thereafter.

“You want speculation or you don’t have any markets,” said Commissioner Bart Chilton in an interview today on Bloomberg TV. “There’s nothing wrong with speculators. It’s when it begins to get excessive. We’ve seen where you can have 30, 35, 40 percent plus in some markets with just one trader holding onto that concentration. That can impact markets.”

The commission estimates that the limits will affect 85 energy traders, 12 metals traders and 84 traders of certain agricultural contracts. The caps will go into effect 60 days after the agency defines the term “swap.” The agency declined to estimate when that will be. Limits outside the spot month are likely to go into effect in late 2012.

The rule calls for traders to aggregate their positions, a change that may affect large firms with multiple strategies. It also would tighten an exemption allowing so-called bona fide hedgers to exceed the caps.
...
Click to expand...

Limits will first apply to spot commodity markets 60 days after the CFTC passes a separate rule that legally defines swaps.
Click to expand...

The Turd has some interesting thoughts on the likely impact of the position limits:

...
With the limits soon going into effect, no institution is going to want to significantly add to short positions. Therefore, the only selling pressure that can drive silver lower from here will have to come from discouraged spec longs. But here's the rub: Spec longs peaked in early April near 50,000 contracts. In the subsequent decline from $48 to today's $32, we've lost over half of that spec long position. The latest CoT spec long total was just 23,571. How many more specs can be chased from silver to drive price substantially lower from here? 2,000? 5,000?. It's hard to say but this much I do know...get ready for more, even crazier volatility.

Why? There is really no other option. JPM et al need to force silver lower in the days and weeks ahead otherwise they will be faced with covering thousands of contracts at very steep losses. They must drive price lower just as they did three weeks ago. But with open interest and spec long positions so low, how can they get people to sell? The answer: Let the CME do the dirty work!

Remember, the CME allegedly raises margins only in response to volatility. IF The Cartel can create enough volatility, the CME will be forced to act. ​And, as we saw in April, margin hikes when combined with steep selloffs can create the conditions necessary to force spec longs out of the market. So, the formula from here is simple:

2) Have the CME raise margins again in response to this volatility.

3) Use dips in price to hurriedly cover short positions.

4) If Cartel buying spikes price back up, this added volatility may inspire additional margin hikes.
...
Click to expand...

Harvey Organ corresponds with Commissioner Bart Chilton quite a bit. Harvey posted this in the comments of last night's report (emphasis mine):

this is from Bart Chilton to me late this evening on the new position limits and exemptions:

The spot month limits go into effect in 60 days after we define swaps, which we are set to do on Nov. 1st.

The all month and aggregate limits (which will include swaps) is 12 months after the initial limits. We do not have swaps data (because that required a rule requiring reporting) so can't set those level yet, but the rule requiring that they will be set (and when and how) is now in place.

On exemptions, we will grant if it is proven that there is a legitimate business risk for each day of trading (a monthly report is mandated). The historical trading is one piece of what we may look at. However, that is not a loophole that automatically grants an exemption. If that were the case, we'd simply be allowing folks to do what they have done. That is clearly not what we have allowed.
B
Click to expand...

Not sure how we missed this, but the CFTC officially defined "swaps" last Friday on November 18th, giving 60 days for traders to comply with the CFTC's new spot-month position limits.

Wow. I would never have expected that they actually reached an agreement on the definition of a "swap" that quick :clap:
I had thought that this was a another trick to kick the can down the road for a while.
D

I wonder if this will impact sprott at all...

If this is going to force JPM's hand on silver, we should see it happening as a confirmation - in price and volumes - maybe catch a good move one way or the other in the process, so it's worth watching.

I rather expect that like any regulation that would appear to suppress the big boys, they just engineer a way around it - spin off little companies to do some of the holding for them so they can avoid the single-house limits, whatever.

The law, in its infinite wisdom and fairness, makes it just as illegal for the rich to beg for food and sleep under bridges as the poor....
D

DCFusor said:
The law, in its infinite wisdom and fairness, makes it just as illegal for the rich to beg for food and sleep under bridges as the poor....
Click to expand...

I'd argue the opposite. We have no rule of law. If you have political contacts, you have no reason to fear prosecution.

The CME, NYMEX, and COMEX have issued a temporary waiver of the requirement that market participants file an updated application in order to exceed speculative position limits. The CME announced they have waived the reporting requirements through May 31st, 2012.
...
Click to expand...

PMBug said:
The farce must go on...

Pathetic. Somebody must be totally panicking.
It´s probably not limited to the precious metals markets, though.
I´ve managed a futures fund (cta) until last year and from my experience natural gas is just as manipulated as pms, if not more.

I'll believe all this nonsense when I see it. The Boyz will not let this go down without a fight. Of course, they can always move the metals desk to London, where everything and anything goes.
S

Update, it's gotten very quiet on this front:

Bart Chilton recently (3-8) gave an interview on CNBC on the subject, Wall Street is obviously bombarding the CFTC with lawsuits...

By the way, they still haven't defined the term "swap" which is also required to enact position limits (see posts above).

Yeah,
Again, I'll believe there are position limits when I see them. And I dont mean limits for everyone besides some bullshit "market makers" like [conveniently] JPM et.al.
S

And the cartel won again. :flushed:

After nearly 9 months of delays (and as Bart Chilton informed SD readers at the end of May), the CFTC has finally defined the word Swaps, meaning the first portions of the commodities positions limits rule will go into effect 60 days from today.
The CFTC voted 4-1 for the definition of SWAPS, with BART CHILTON the lone vote against the rule. Chilton voted against the definition out of concern certain firms (ie JP Morgan) will side step the position limits by using forward contracts or swaps.

For those who missed it live, the full webcast of today’s meeting can be found at the link below:

Definition of “Swap” and “Security-Based Swap”
The Commissions believe that the definitions of “swap” and “security-based swap” in Title VII are detailed and comprehensive. However, as the Commissions did in the Proposing Release, the Commissions are clarifying in the final rules and interpretations that certain insurance products, consumer and commercial agreements, and loan participations are not swaps or security-based swaps.
Transactions that are Not Swaps or Security-Based Swaps
 Insurance
The Commissions are issuing final rules and interpretations that would clarify that certain contracts, provided by certain entities, each meeting specified requirements would be considered insurance and not swaps or security-based swaps.

Final Rules
 The final rules provide that certain transactions are swaps:
Foreign Exchange (“FX”) Forwards and FX Swaps:
 These products are defined as swaps, subject to a determination by the Secretary of the Treasury, as permitted under Title VII, to exempt them.
 If exempted by Treasury, the final rules reflect the provision of the statute that certain requirements will continue to apply, including reporting and business conduct standards.
o FX Products that are outside Treasury’s determination and are swaps (unless otherwise excluded by the statute):
 Foreign Currency Options
 Non-Deliverable Forwards in Foreign Exchange
 Currency Swaps and Cross-Currency Swaps
o Forward Rate Agreements, notwithstanding their “forward” label, are swaps (unless otherwise excluded in the statute).

And here comes the Grandfather clause:

Grandfather for Existing Transactions
 In response to comments, the Commissions are including a grandfather provision in the final rules, which provides that a transaction entered into on or before the effective date of the Product Definitions will be considered insurance and not fall within the swap and security-based swap definitions, provided that, at the time it was entered into, the transaction was provided in accordance with the Provider Test.

Guarantees of Swaps and Security-Based Swaps
 In the Proposing Release, the Commissions requested comment on the treatment of guarantees of swaps and security-based swaps.
 The Final Release includes an interpretation by the CFTC that a guarantee of a swap is an integral part of the swap, and therefore the term “swap” includes a guarantee of such swap, to the extent that a counterparty to a swap position would have recourse to the guarantor in connection with the position. The Commission will address the practical implications of this interpretation, including applicable reporting requirements, in a separate release.
 The SEC interprets guarantees of security-based swaps to be securities under the federal securities laws; the SEC plans to address reporting requirements for guarantees of security-based swaps in a separate rulemaking.

Entire final rules on SWAPS can be found at the pdf below:

These aren't the "swaps" you are looking for.

Who were the two hold-outs that didn't like this rule, and how much were they paid for their votes?
S

ancona said:
Who were the two hold-outs that didn't like this rule, and how much were they paid for their votes?
Click to expand...

The 2 ones were Republican appointees who vote for whatever Wall Street wants.

The last vote was 4-1 in favor of the last addition to the rule. It made the position completely useless. That why the only honest commissioner, Bart Chilton, voted no.
S 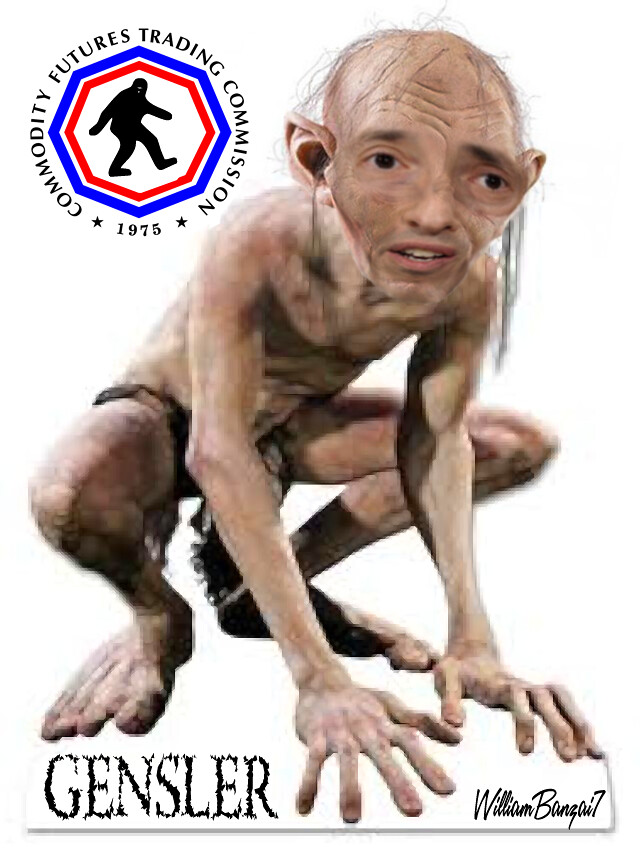