It's fake Gold Eagles that have me worried...

Fake Silver Eagles? The Secret Service won't even bother looking into it. Why should they? Government is proving more inept and vile every day!

Of all the differences they pointed out in the fake, I think they missed the most obvious one: the dress is not pleated on the fake.

...
“We’ve gotten nailed by similar fakes,” the dealer posted. “The sellers will often take a roll of genuine coins and swap out a few in the middle. Thus, cursory inspection, or even quickly rifling through the ‘roll’ fails to reveal the fakes. We keep some fakes on-hand for employees to look at and learn what to watch out for.”

Said another: “Goofy obverse. They could easily be slipped into solid date rolls without many noticing. Not many people weigh each Eagle when they purchase, [especially] if you are buying more than 10. They could pass. That’s the scary part. Lots of newbies buy Eagles for some reason or another. I could easily see people buying these, [because] they are good enough to be a threat.”

Among the general differences, the weight of the counterfeit is 32.608 grams compared with the statutory weight of 31.101 grams for a genuine American Eagle silver bullion coin. The fake is thicker than the genuine coin, by as much as 20 to 25 percent, but the diameter of the fake is slightly smaller than the standard 40.6 millimeters.

The die orientation of obverse to reverse on the counterfeit is medal turn, not coin turn. For a U.S. coin, when its obverse is right side up, turning the coin on its vertical axis will reveal an upside-down view of the reverse.

In medal turn, which is what appears on the fake silver American Eagle, the obverse and reverse both face right side up at the same time.
...
Click to expand...

I guess there is some peace of mind in paying a premium for Mint sealed tubes/boxes.
J

PMBug said:
I guess there is some peace of mind in paying a premium for Mint sealed tubes/boxes.
Click to expand...

This makes me so mad I can't describe it accurately without a string of colorful metaphors and racial stereotypical hate words. Suffice it to say that china has become the worlds epicenter of fake everything, and until the rest of the world censures them and forces a painful penalty, such as an additional 1% import tax every time we find a fucking fake, then nothing will change.
A

Time to start collecting something else? Maybe fine wine. Harder to fake and when the world ends you won't care.
M

Question to anyone who has dealt with these fakes... Are they magnetic?
M

Just watched the vid that PMBUG posted. Sounds like they're not magnetic based on the metal content they described. Where is the evidence that these coins are coming from China??? I know that there are not copyright laws there, but the same goes for other asian, latin american, and other countries...

There are reports of the fakes being a different size than the originals. The Chinese are really good at making stuff. They can make cheap, inexpensive stuff and they can also make high quality stuff. They make most of the stuff on the planet. So, why the hell would they make the coins the wrong size??? Because they're stupid? Because they don't have much experience at manufacturing products to meet certain specs...?

I think there might be more to this than we're being told, or mistold. I can think of some other countries who we might be told are producing fake silver and gold coins... Iran, North Korea, Cuba, Venezuela.... Oh, Syria, duh... I almost forgot them. And domestic terrorist counterfeit labs... Can't leave them out.

Anyway, yes, it could absolutely be true that these coins are indeed coming out of China. I can conceive it, but not believe it, because I haven't seen any evidence that convinces me of that.

motlynch said:
... Where is the evidence that these coins are coming from China??? ...
Click to expand...

Maybe they bought it directly from a Chinese supplier that is advertising them on the internet. They are not hard to find:

That's just one site. I know there are others.

Well, you have a choice - you either make the coins the right size or the right weight. It's difficult to do both when you aren't using the correct material.
C

Theoretically, there is another way to tell a real coin from a fake. Gold and silver are very good conductors of electricity. Better than any of the base metals used to make a plated fake, even copper. So a solid silver coin should have a lower resistance than a coin with a base metal center.

A sensitive enough ohmmeter should be able to detect the difference in the resistance across a fake silver eagle as opposed to a real one, in theory. I have access to a meter which reads down to 1/10,000th of an ohm, but I don't have any fake ASEs to test my theory.

I'm going to try to come up with a sound test based on the "ping test" from the video. If I come up with something useful, I'll try to post it here.

Try using a modern quarter or half dollar.
C

PMBug said:
Try using a modern quarter or half dollar.
Click to expand...

I thought about trying an Eisenhower dollar.

Would your current test work on plated rounds, or only homogenous alloys?

I would like to get hold of one to see if our XRF would detect it, or if the silver skin is too thick to permit detection of contaminant metal.
C

PMBug said:
Would your current test work on plated rounds, or only homogenous alloys?
Click to expand...

I think it would work on both. The resistance of a homogenous alloy would vary with the metal content (silver/copper ratio). A plated round would have essentially two current paths thru it. One thru the silver plate, and another thru the base metal center. The higher resistance of the base metal center should give an overall resistance higher than that of a single chunk of silver or gold. But again, this is all theory.

Cyber - I think the contact resistance is going to dominate with Silver. You'd have to dent the coin, even with a 4-wire ohmmeter, to get that consistent enough to be sure.

You could make coins the right size and the right weight, it's all a matter of what you use in the alloy, if all you want to do is cut the "carats". Same as with gold/tungsten, except in the case of silver, which is less dense, there's more workable combos - though at some point, they wouldn't "look right" without plating.

Most alloys have a much higher specific resistance than either metal in them, however, so that test is a good thought. You can for example easily measure ppm levels of contamination in copper that way.
C

I pulled the audio of the ping test fom the above video and pumped up the level to make it easier to hear. Since I can't post an mp3, I had to zip it and post the zip file.

These stories about fake coins seem to make the rounds whenever we have a spike in physical buying. I understand why they do that but part of me thinks it's intentionally thrown out there to keep people from buying coins entirely.

"more than likely to be a fake"

Oh My Gosh!!! I never thought this could be possible. Should be more careful and read more on the counterfeits. I got to see an original silver American Eagle.

went down to my local PM/coin dealer shop. (Patriot coins and ammo). 10oz silver bars (generic) for 250. plus 8% sales tax (here in Texas, that would be 20.00 each). This was laying on the counter (these are stock photos): 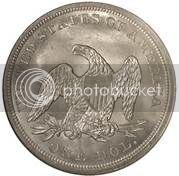 the one she had was very, very worn, you could barely make out the date.

I said, "is that real?" She put a magnet over it and it jumped off the counter.
she said someone tried to sell it to her husband, but it had "In God We Trust" over the eagle, which wasn't added until later. Sharp eye he had. I wouldn't have caught it, it looked real. Wonder how they faked the wear.
You must log in or register to reply here.
Share:
Facebook Twitter Reddit Pinterest Tumblr WhatsApp Email Share Link
Top Bottom