Each massive drop in inventory was followed by a great price rally.

HOUSTON -- Gold market watchers have been bombarded with a litany of negative, scary sounding commentary and labels just recently. Gold bears are feeling triumphant and cocky about now with something close to $70 in just over a week. So they are out in force, on TV and in print pounding the table and talking their book with the best, scariest lingo and jargon they have.

Can't say we blame them. This is a rare chance for gold bears, but is it us, or are the bears sounding kind of hyperbolic just rencently? (More...)

The so-called “Death Cross” technical signal, for example, which we took a look at earlier this week in charts. The Death Cross has not been nearly as terrifying as the name implies since the gold bull market began, but it sure does conjure up visions of the apocalypse for gold mavens. OMG! It's ... it's ... it's a dreaded Death Cross! Grab your children (and their college funds) and run, run for your lives!

That’s the idea, you know. To scare the ‘bejesus’ out of people when the scaring is good.

So, we thought we would look at the numbers, which we are wont to do here at Got Gold Report. And sure enough, there really has been a significant outflow of gold metal reported by GLD. But when we compare to similar negative liquidity events in the recent past, the bearish implications of a GLD metal reduction, even one in size, are not all that clear.


For the record, since GLD metal holdings peaked on December 12 of last year (gold then $1,712 in London) at a record 1,353.35 metric tonnes, the gold ETF has seen 63.04 tonnes (4.7%) sold back into the gold market by the trusts’ authorized participants, to show 1,290.31 tonnes of gold as of today. That large drop in holdings shows on the chart clearly with about half of that drop coming in just the past panicky hedge fund fear mongering week. 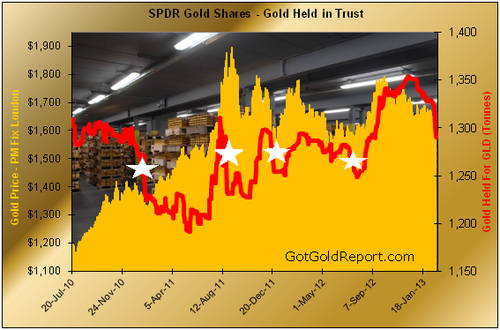 Just a quick glance at the chart, however, shows no fewer than four previous large metal reduction events for GLD since the summer of 2010.

You know what is an interesting coincidence for all four of them? Hold onto your gold plated bull or bear statues and listen up!

Yeah, that’s right, in all four cases the large drops in metal holdings were immediately or soon followed by rising gold prices.

Charitably in deference to our friends in the financial media: Death Crosses, and “Vicious Circles of Selling” notwithstanding, maybe in a bull market the most obvious signals are not what the headline writers think they are?

Gene Arensberg for Got Gold Report
Click to expand... 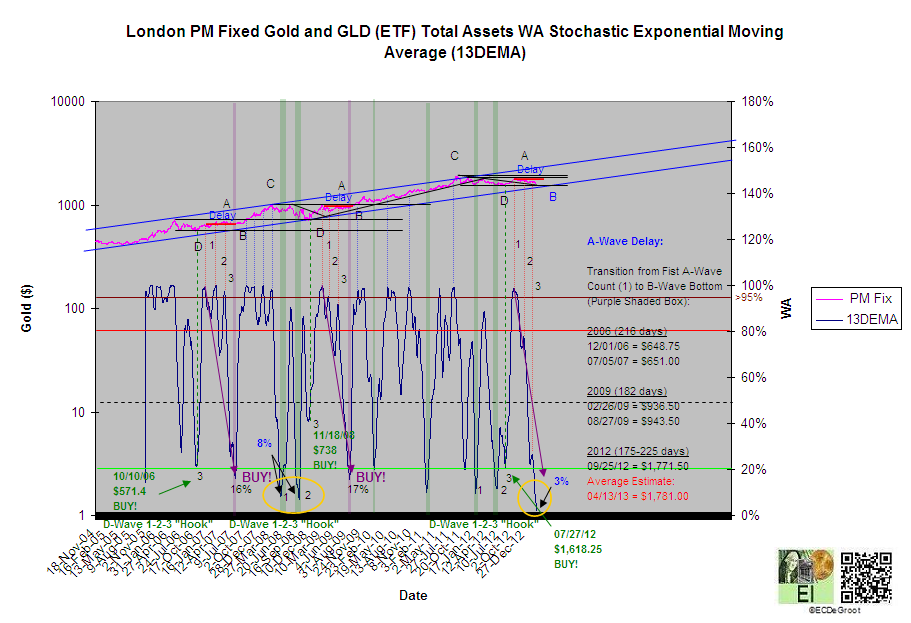 The world's largest gold-backed exchange-traded fund is on course for its biggest monthly outflow since its inception, outstripping declines seen during similar bullion price falls, as investor confidence in the metal falters.
...
"Who exactly has been liquidating, and why, we don't know, but it has been spread across multiple funds, suggesting a reasonably broad-based exit of some investors from physically backed gold funds," Credit Suisse analyst Tom Kendall said.

"Unlike previous periods when you could make the case that some of that liquidation had been from people transferring to allocated gold, I would very much doubt that has been happening on this occasion. I haven't had any indication that there's been a switch out of ETFs and into allocated physical."
...
Click to expand...