Japan not to be out done (global QE watch)

well just more of the same - just another way of forcing interest rates, that CB can control, down.

The two month wait is over and the most overtelegraphed central bank news since November 2012 finally hit the tape when the BOJ announced last night what everyone knew, namely that it would proceed with open-ended asset purchases and a variety of economic targets, key of which was 2% inflation. ...
Click to expand...

The governor of the Japanese central bank, Masaaki Shirakawa, said on Tuesday that he had offered to step down on March 19, three weeks before the end of his term, under intense government pressure on the bank to take bolder steps to resuscitate the deflationary economy.

Prime Minister Shinzo Abe is expected to replace Mr. Shirakawa, who has long preached caution on monetary policy, with a successor who is more open to printing money, stoking inflation and bringing an end to the falling prices that have weighed on Japan.

During his five-year term, Mr. Shirakawa resisted calls from successive governments to be more aggressive, warning that loose money would only lead to unchecked government spending and runaway inflation. Mr. Shirakawa also argued that the government, not the Bank of Japan, needed to do more to encourage economic growth through structural reforms and other growth policies.
...
Click to expand...

... and the firemen yell, "we need more gasoline!"

Abe spoke before the lower house budget committee on Tuesday.

He said Bank of Japan policymakers have expressed their determination to meet the target in about 2 years. He said that declaration by the BOJ has already been effective in weakening the yen and boosting stock prices.

Abe said the BOJ's commitment will raise inflation expectations and result in a 2 percent rise in prices.

BOJ Governor Haruhiko Kuroda told the budget committee the central bank will use all the policy tools at its disposal. He said the bank will implement bold monetary easing measures to achieve the price target as soon as possible.

But he admitted that it won't be easy to end 15 years of deflation.

... In his effort to do "whatever it takes", the BoJ is upping asset purchases, extending the maturity of purchases and merging its asset purchase program; increasing the size to JPY7tn and buy securities out to 40 years. Though no mention of foreign bond-buying was made, and increase in ETFs and REITs is included. They have given themselves a two-year window to achieve the 2% inflation goal ...
Click to expand...

The Bank of Japan unleashed the world's most intense burst of monetary stimulus on Thursday, promising to inject about $1.4 trillion into the economy in less than two years, a radical gamble that sent the yen reeling and bond yields to record lows.

New Governor Haruhiko Kuroda committed the BOJ to open-ended asset buying and said the monetary base would nearly double to 270 trillion yen ($2.9 trillion) by the end of 2014 in a shock therapy to end two decades of stagnation.
...
Click to expand...

Kyle Bass' Japanese implosion under might be happening right now:

Yra Harris said:
...
***BACK To the front on the Japanese declaration of war on the European Central Bank. The G-7 has maintained that domestic policy objectives of quantitative easing are a net positive for the world, the only problem is if a central bank ramps up it quantitative easing by PURCHASING BONDS AND ASSETS OF OTHER COUNTRIES. THIS WOULD BE A POLICY THAT WOULD CROSS THE LINES OF ACCEPTABLE. This is also the stance taken by Chairman Bernanke in his speech that I have previously cited, given in London on March 25, 2013. Bernanke said: “Again, the distinction between monetary policies aimed at domestic objectives and trade-diverting exchange rate devaluations or other protectionist measures is critical.” It seems that the new Japanese policy obscures those distinctions. How?

This is the critical point that must be understood for the impact of the BOJ‘s recent decision. THE RAMPING UP OF THE BOJ BOND BUYING, ITS EFFORTS TO RAPIDLY INCREASE MONEY SUPPLY, AND THE DESIRE TO CREATE 2% INFLATION MEANS THAT JAPANESE INVESTORS AND LARGE INSTITUTIONS WOULD BE CRAZY NOT TO UNLOAD THEIR MASSIVE HOLDINGS OF LONG-TERM BONDS TO THE MOST READY BUYER … THE BOJ. By unloading bonds to the BOJ the Japanese investor will be forced to either by the Nikkei or search for higher yielding bonds in foreign destinations. Yes, the BOJ will not directly be purchasing foreign assets in contravention of the G-7 agreement but its policy of FINANCIAL REPRESSION of Japanese citizens will force insurance companies and private citizens to undertake such purchases.

The action in the European debt markets on Thursday and Friday was certainly evidence of the impact of BOJ policy. The yields on 10-year notes all across Europe is indicative of the search for yield. French bond rates have fallen 25 BASIS POINTS since the Japanese announcement, as have the bonds of Belgium, Austria,Italy and Ireland. It will be difficult to comfortably short the debt of any highly rated sovereign now that the Japanese private investor is on the search for higher yielding instruments to replace long-held JGBs. The average Japanese investor could comfortably own domestic bonds at very low yields as long as prices remained steady or were in a deflationary mode. The BOJ just ended the security of that investment strategy. In a globalized world of FREE CAPITAL FLOWS IT IS DIFFICULT TO HALT POLICY OUTCOMES AT THE BORDER.
...
Click to expand...

The Bank of Japan (8301)’s “huge bet” by boosting quantitative easing won’t turn the economy around and is instead sending the nation toward default, said Takeshi Fujimaki, former adviser to billionaire investor George Soros.
...
“By expanding the monetary base to 270 trillion yen, the BOJ is making a huge bet which I think it will ultimately lose,” Fujimaki said in an interview in Tokyo on April 11. “Kuroda’s QE announcement is declaring double suicide with the government. The BOJ will have to share the country’s fate and default together.”
...
“Japan’s finance is sinking into the ocean,” Fujimaki said. “There’s no escape from a market crash in the future when you have such enormous debt.”
...
Click to expand...

The Reserve Bank of Australia cut its benchmark interest rate to a record low, driving down a currency that has damaged manufacturing and boosted unemployment.

Governor Glenn Stevens reduced the overnight cash-rate target by a quarter percentage point to 2.75 percent, saying in a statement that the Aussie’s record strength “is unusual given the decline in export prices and interest rates.” Eight of 29 economists predicted the seventh cut in the past 19 months, while money markets had seen about a 50-50 chance.
...
Click to expand...

‘if the Fed can do it to the U.S. [markets] the Bank of Japan can do it in Japan,’” says Stephen Roach, who notes the BOJ’s quantitative easing plans are roughly double what the Fed is doing in the U.S.

...and basically putting (or rather trying to put) a cap on gold!

Yeah..I'm still watching that lid and that fire under the pot is still pretty HOT!

This video was posted in another thread, but it is worth posting again in this thread because it is germane to what is happening with Japan:


It starts slow and is a bit dry, but she is laying a foundation to understand the points she makes later.
A

Wow, this video "chalk talk" is really excellent and thanks for posting it. I never understood the carry trade until now. She has identified something that is already starting to shake the world. This is must see TV for anybody with money in the market. 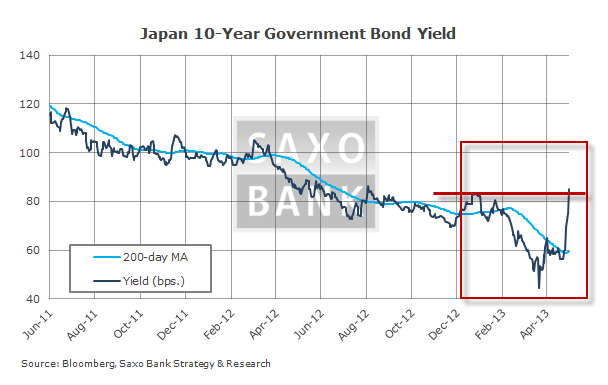 I have been paying close attention to Japanese yields in light of this statement by the Bank of Japan chief: "I do not expect a sudden spike in long-term bond yields."
...
Click to expand...

...
When Japanese inflation spikes higher (and it will), the only way the Bank of Japan will be able to suppress long-term rates is to buy every long-term bond on the market.

A currency crisis in Japan is now just around the corner.
Click to expand...

um...that kind of looks like a major spike in interest rates, however in the meantime it looks like the data for the US economy (today) is showing some serious weakness, so the Fed will keep up QE forever, as will the Japanese. This is not encouraging news.

TOKYO (NQN)--The Nikkei Stock Average plummeted 1,143 points Thursday, logging its 11th biggest decline ever. The trading range was an impressive 1,458 points, a 13-year high and bigger than the 1,214-point swing immediately after the Great East Japan Earthquake.
Click to expand...