What are you listening to?

Well, That was NOT current day LA or California for sure.
C

The Johnny Cash version of this song is one of my all-time favorites.

is this the What Are You Listening To thread?

There was a comedic version of it, that was playing constantly on the local easy-listening radio station in the early 1970s. Wish I could remember who it was, or find it. It was Ray Stevens, or some other novelty singer...but he he just took it apart.

It was only years later I heard Johnny Cash do it straight.

spinalcracker said:
is this the What Are You Listening To thread?
Click to expand...

That's what it could turn into... maybe the thread title could change? @pmbug

it is Jackie blue

Just a fantastic player, only thing better is listening to him at the Ryman

takings mrs BE on a cruise later this week... cigar the lady's for you dude

Morgan easy on the eyes and miraculous voice

Location
Hills and valleys up North

The cool part of this thread is looking up some of these bands I've never heard of.

A bit of history on this song:


The song was the first collaboration between guitarist Eric Clapton and artist Martin Sharp. Clapton composed the music, inspired by the Lovin' Spoonful's 1966 hit "Summer in the City".[5] "I just started chatting to Eric", said Sharp, who lived in the same building. "I told him I had written a poem. He, in turn, told me he'd written some music. So I gave him my poem. Two weeks later, he turned up with it on the B-side of a 45 record."[6] Sharp had written the lyrics to the melody of Leonard Cohen's song "Suzanne", specifically the Judy Collins version.[7]​
​
The song was the B-side for "Strange Brew" in June 1967, several months ahead of the group's second album, Disraeli Gears, which included both songs. Cash Box called it a "visionary hard rock excursion."[8] AllMusic's Matthew Greenwald calls it, "One of a few overtly psychedelic songs to have aged gracefully ... Lyrically, it's a relatively factual and colorful rendering of the great Greek tragedy Ulysses".[1]​
​
In his 2007 autobiography, Clapton recalls:​

When [first meeting Sharp] he heard that I was a musician, he told me he had written a poem that he thought would make good lyrics for a song. As it happens, I had in my mind at that moment an idea inspired by a favorite [sic] song of mine by the Lovin' Spoonful called "Summer in the City," so I asked him to show me the words. He wrote them down on a napkin and gave them to me ... These became the lyrics of the song "Tales of Brave Ulysses".[9]​
Click to expand...

The song uses a descending tetrachord bass line of D/C/B/B-flat, which Greenwald describes as "simple but effective".[1] Jack Bruce, on bass, also provides the vocal, and Ginger Baker is on drums.​
​
Cream recorded the song at Atlantic Studios in New York City in May 1967, during the sessions for Disraeli Gears.[9] Atlantic brought in engineer Tom Dowd and producer Felix Pappalardi to work with Cream on their next album. For the recording, Clapton used a wah-wah pedal guitar effects unit for the first time.​
​
Cream performed the song in concert and a 10 March 1968 recording from Winterland in San Francisco is included on Live Cream Volume II.[1] In May 1968, the group were filmed performing it for The Smothers Brothers Comedy Hour television programme.[10] "Tales of Brave Ulysses" was later overshadowed by "White Room", which utilised the wah-wah and a superficially similar chord progression (although starting on Dm instead of D major) to create one of Cream's biggest hits.[1]​ 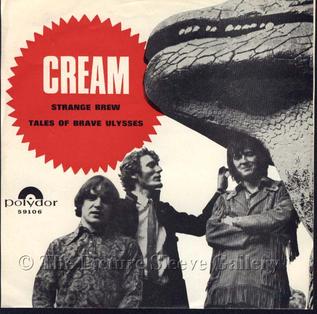